Blockbuster bonanza: Big movies to look out for in 2010 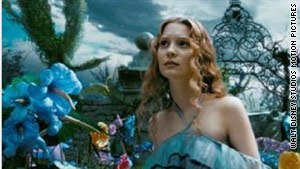 Tim Burton's adaptation of "Alice in Wonderland" is one of 2010's most anticipated movies.
STORY HIGHLIGHTS
RELATED TOPICS

London, England (CNN) -- After taking fewer risks in an uncertain economy, Hollywood is hoping this year's crop of sequels, remakes and CGI spectaculars will be safe bets at the box office.

Despite this, there is still lots to get excited about.

The Screening Room has trawled through the rest to bring you what we hope is, if not a definitive list, at least a good starting point in the quest for some of the biggest and most exciting movies coming up this year (bear in mind that release dates can change).

So, without further ado, here is The Screening Room's at-a-glance guide to the movies likely to fill a cinema near you in 2010...

'The Book of Eli,' (Albert Hughes)
Starring: Denzel Washington, Gary Oldman, Mila Kunis
The Scoop: A post-apocalyptic tale in which one man travels across America to to protect a sacred book that holds the secrets to saving mankind.
Genre: Action/Drama
Watch the trailer here

CORRECTION
An earlier version of this article incorrectly reported that a sequel to James Cameron's "Avatar" was slated for release in 2010.

'Prince of Persia: The Sands of Time,' (Mike Newell)
Starring: Jake Gyllenhaal, Gemma Arterton, Ben Kingsley and Alfred Molina
The Scoop: Based on the 1989 video game, "Prince of Persia" follows a medieval prince (Gyllenhaal) as he partners with a rival princess (Arterton) to stop the evil Grand Vizier (Kingsley) from starting a sandstorm that could destroy the world.
Genre: Action/Fantasy

'Robin Hood,' (Ridley Scott)
Starring: Cate Blanchett, Russell Crowe
The scoop: "Gladiator" director Ridley Scott is back together with Crowe, one of his favorite collaborators, in this remake of the epic tale of an altruistic bandit who steals from the rich and gives to the poor.
Genre: Action/Adventure/Drama

'Sex and the City 2' (Michael Patrick King)
Starring: Sarah Jessica Parker, Kim Cattrall, Cynthia Nixon, Kristin Davis and Chris Noth
The scoop: After the spectacular success of the first adaptation of HBO's hit TV show "Sex and the City" in 2008, Manhattan's first ladies of fashion are back on the town and taking a trip out to the desert.
Genre: Romantic Comedy/Drama
Watch the trailer here

'Clash of the Titans,' (Louis Leterrier)
Starring: San Worthington, Liam Neeson, Gemma Arterton and Ralph Fiennes
The Scoop: Almost 30 years after the first fantasy film, Perseus, mortal son of Greek god Zeus, is back to take on Medusa and the Kraken to stop their evil from spreading to earth and the heavens.
Genre: Action/Epic
Watch the trailer here

'Jonah Hex,' (Jimmy Hayward)
Starring: Josh Brolin, Megan Fox, John Malkovich, Michael Fassbender
The Scoop: In the Wild West, a scarred bounty hunter tracks a voodoo practitioner who plans to on liberate the South by raising an army of the undead.
Genre: Western/Action

'Salt,' (Phillip Noyce)
Starring: Angelina Jolie, Liev Schreiber
The Scoop: Angelina Jolie reprises familiar role as kickass spy, this time as Evelyn Salt, a CIA agent on the run after being accused of acting as a Russian spy.
Genre: Action/Thriller

'Chronicles of Narnia: The Voyage of the Dawn Treader,' (Michael Apted)
Starring: Ben Barnes, Skandar Keynes, Georgie Henley, Will Poulter, Eddie Izzard, Liam Neeson
The Scoop: The Pevensie siblings head back to Narnia where they take a dangerous sea voyage with Prince Caspian, fending off a barrage of villainous magical creatures in all forms.
Genre: Action/Fantasy

'Tron Legacy,' (Joseph Kosinski)
Starring: Jeff Bridges, Michael Sheen, Olivia Wilde and Garrett Hedlund
The Scoop: Sam Flynn and his father Kevin (Bridges, star of the 1982 sci-fi hit) fight their way through a super hi-fi video game universe where Kevin has been living for the past 25 years.
Genre: Action/Fantasy
Watch the trailer here