Is it really an honor just to be nominated? 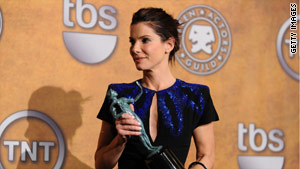 Actress Sandra Bullock recieved an Oscar nomination for her role in the film "The Blind Side."

It's the line we hear at almost every Academy Award ceremony. It's as much part of the Oscars as the red carpet fashion watch and the thank-you speeches that drone on and on.

A performer is nominated for an Oscar, but loses to someone else. The camera pans to the ecstatic winner rushing to the stage, but what happens to the Oscar nominees who are left gamely smiling in their seats?

Does it help or hurt them to fall just short of winning Hollywood's most prestigious award?

It depends who you ask.

"I can't see any downside to it," says actress Marsha Mason, a four-time Oscar nominee who was nominated for "The Goodbye Girl," "Only When I Laugh," "Chapter Two" and "Cinderella Liberty," but never won.

"People who would not have paid attention to me started to pay attention," Mason says of her post-Oscar-nominee life. "When I went to meet Clint Eastwood for [the film] 'Heartbreak Ridge', the first thing he mentioned to me was, 'Wow, that's terrific, you have four Academy nominations.' "

The Oscar nominee whose career went into overdrive

Mason's experience isn't universal. Plenty of actors and actresses seemed to have melted into the background scenery after their Oscar nominations.

Yet there are other performers whose careers seemed to shift into overdrive once they were nominated. The late Paul Newman was nominated for best actor in the Academy Awards on nine occasions beginning in 1959 for roles in films such as "The Hustler," "Hud" and "Cool Hand Luke."

Though he didn't win, Newman continued to be one of Hollywood's leading men. He eventually won a best actor Oscar in 1987 for "The Color of Money."

The actor Mickey Rourke was nominated last year for a best actor Oscar for his role in "The Wrestler." He didn't win but earned widespread critical praise.

He also landed a coveted role as the villain "Whiplash" in "Iron Man 2," says Gregg Kilday, film editor at The Hollywood Reporter.

"Rourke reconnected with a lot of folks, and in an industry built on relationships, that doesn't hurt," Kilday says. "Certainly Mickey Rourke is getting more money for 'Iron Man 2' than he did for 'The Wrestler.' ''

The young actress Saoirse Ronan was nominated for best supporting actress in the 2007 film "Atonement." Ronan didn't win, but it didn't hurt her career, Kilday says.

"She went on to be cast in 'The Lovely Bones,' " Kilday says. "Would that have happened anyway? Possibly."

An Oscar nomination doesn't just help individual performers. It can also help get a film made, Kilday says. Producers can tell would-be investors the filmmakers have landed an Oscar nominee when they're trying to line up support.

"It gives them a little bit more of a name. That's helpful to producers that have to go out and raise money," Kilday says.

He says the gross of the 1999 film, "American Beauty," grew by more than $55 million (to a total of $130 million) after it was nominated for and won several Oscars. The film won five Oscars, including best picture, best actor and best director.

"It's no secret that Academy Award nominees enjoy a bump just after the nominations are announced, and just after the awards show as film fans rush to see the movies," Dergarabedian says.

How to build on an Oscar nomination

A performer can build on an Oscar nomination by making smart choices, says Christopher Sharrett, a professor of communication and film studies at Seton Hall University in New Jersey.

One Oscar nomination, by itself, has limited usefulness, Sharrett says.

"It can raise a person's public profile for a spell, but if they don't follow it up with something really credible, it's like a dime-a-dozen -- people get nominated all the time," Sharrett says.

The actor Tommy Lee Jones is a classic example of how to follow up an Oscar nomination, Sharrett says. Jones was nominated for best actor in the 1992 Oliver Stone film, "JFK." He used that nomination in part to pick up good roles and become a viable box-office personality, Sharrett says.

Jones won best supporting actor for his role in the 1994 film, "The Fugitive." But he had already parlayed his Oscar nomination into a string of popular films, Sharrett says.

"He [Jones] is now a durable actor," Sharrett says. "He has an appealing personality and he's used his craggy, weathered good looks to establish himself as a star."

Mason, the four-time Oscar nominee, was able to do the same.

She says her Oscar nominations gave her credibility with casting agents and directors. At times, after an Oscar nomination, Mason says she couldn't take roles she wanted because she was so busy.

Today, she is still known for her Oscar-nominated roles in films like 1977's "The Goodbye Girl," she says. Mason says that people still come up to her and congratulate her for winning the Oscar.

Does she correct them? Mason laughed.

Mason says it was easier to accept losing an Oscar bid years ago in Hollywood because the competition wasn't as fierce. Now, winning an Oscar is more tied into the marketing of a movie.

Mason says her disappointment was lessened by the realization that winning an Oscar is like "a crap shoot."

"I don't think a nomination will ever hurt you," she says. "It's your own peer group that voted for you. That's really a big honor in terms of your career."

Mason is still acting. She's working on a solo performance piece and she has founded a line of organic farm and natural products called "Resting in the River."

Mason suggested that the best acting job Oscar nominees put on sometimes takes place during the Oscar ceremonies, not in their films.

When asked if she and others really mean it when they say it was just an honor to be nominated, she paused before saying: