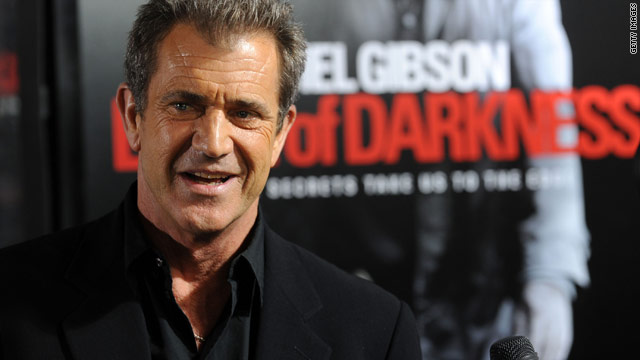 (CNN) -- Mel Gibson's mouth may have landed the actor in hot water once again.

While promoting his new movie, "Edge of Darkness," Gibson is shown on tape making some unsavory comments.

In a video that has now gone viral, Gibson let an expletive slip while he was still wearing a microphone and appearing on camera for a segment on Chicago's WGN-TV with reporter Dean Richards.

Richards asked Gibson if he felt like he was "a different person, a better person," than he was four or five years ago, noting that the actor has "had a lot of ups and downs" since then.

In 2006, Gibson was arrested for driving while under the influence, and allegedly made anti-Semitic remarks to his arresting officers.

During the interview with Richards, Gibson responded that the past few years have been "a real roller coaster ride," but said he thinks he's the same person he always was.

Richards then asked Gibson if he felt the public would receive him differently, at which point Gibson became visibly agitated.

"That's been almost four years, dude," he told Richards. "I've moved on. But I guess you haven't." Richards said he just wondered whether Gibson thought the public had moved on, to which Gibson replied, "Well, I certainly hope so. That was a while back, and I've done all the necessary mea culpas, so ... let's move on, dude."

Richards wrapped up the interview with a standard thank-you-for-coming, and Gibson, drinking coffee, gave the reporter a thumbs-up before muttering a loud-and-clear "a--hole" right into his mic before the satellite feed was cut.

This comes after an interview with CNN affiliate station KTLA, where entertainment reporter Sam Rubin asked Gibson if his long absence from acting had anything to do with the alleged anti-Semitic remarks. Gibson denied he ever uttered statements of that nature, and then asked Rubin, who is Jewish, "I gather you have a dog in this fight?"

Gibson has since apologized to Rubin for the query, Rubin confirmed.

Gibson's publicist Alan Nierob said Gibson was not aiming his expletive at WGN's Richards, but rather at Nierob himself, who was "pulling faces" during the interview.

On Richards' WGN-TV blog, the reporter shared his side of the story.

The interview "was pleasant enough for the first half but as my questions became more challenging, his tone and even physical demeanor changed," Richards wrote.

"I didn't brow beat him. I didn't make a judgment on him," the blog read. "Apparently, he thought I'd back off. We don't roll like that in Chicago. ... A star of his caliber, presumably with good PR people, should have been prepared with a simple response."

Richards said he was shocked to hear Gibson use the expletive "when he thought he was off camera."

In Richards's observation, "famous person or not, the true measure of a person is how they act when they think no one is looking."

As of Wednesday, no one from Gibson's team has reached out to Richards.