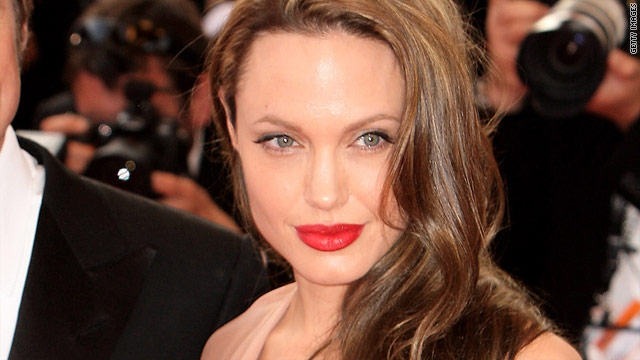 Angelina Jolie has been cast to play Kay Scarpetta but fans of the book series claim she doesn't fit the description.
STORY HIGHLIGHTS
RELATED TOPICS

(The Frisky) -- It's official. Angelina Jolie has signed on to play medical examiner Kay Scarpetta in an as-of-yet untitled movie based on Patricia Cornwell's 17-book series.

Cornwell is pretty pumped about the choice. "When Angelina came out of the left field last year, I was floored," she said. "Angelina had pithy things to say about what she wanted to do. She was direct and goal-oriented."

However, the fans of the books -- let's just say they're not too happy.

They say that, for starters, Angelina is far too young to play the character who is 40 to 45 on paper. Not to mention that while Angelina is exotic-looking, Kay was described as an All-American beauty.

Originally, Jodie Foster was approached to play the role. After she refused, many fans seemed to be rooting for Elizabeth Mitchell, aka Juliette on "Lost." One fan summed it up: "Angie is all wrong to play Kay."

The Frisky: Anne Hathaway left the Catholic church for her gay brother

But this is hardly the first time that people have been up in arms when a casting decision has been announced for a movie about a beloved character.

There was no love for the first vampire

When Summit Entertainment announced the cast of the first "Twilight" movie, people seemed to be cool with the choice of Kristen Stewart to play Bella. But folks were up in arms that Robert Pattinson, then known only as Cedric Diggory from "Harry Potter," was going to be playing the unnaturally beautiful Edward. "When we were thinking of casting him, we put it on the Internet, and people were sending emails like, 'He's revolting, He's disgusting. He can't be Edward. He's not good enough,'" remembers director Catherine Hardwicke. "After we put out the first images of his as Edward, they started turning around."

In 2006, Daniel Craig was announced to be the sixth actor to play James Bond. And fans threatened to boycott. One blogger wrote, "How can a short, blond actor with the rough face of a professional boxer and a penchant for playing killers, cranks, cads and gigolos pull off the role of a tall, dark, handsome and suave secret agent?" Pierce Brosnan tried to quiet the fire. "I think Daniel is a very fine actor," he said. "These are rocky waters, but I think he will have the last laugh."

The Frisky: Ungrateful stars who diss their own movies

Casting for comic book movies elicits some of the nastiest feedback from fans, going back ... oh, forever. In 1989, fans freaked out about the choice of Michael Keaton to play Batman. ''He might have made a good Joker,'' one said to the Los Angeles Times, ''but his comic style ... has doomed this ... 'serious' treatment.'' And who can forget the fury over Tobey Maguire being cast as "Spider-Man," or Hugh Jackman as "Wolverine," or of the uber-blonde Kate Bosworth as Lois Lane in "Superman Returns." People are currently debating whether John Krasinski can do Captain America.

Famous geisha was Chinese not Japanese

"Memoirs of a Geisha" is one of those books nearly everyone (yes, that's hyperbole) has read. So when director Rob Marshall announced that Ziyi Zhang of "Crouching Tiger, Hidden Dragon" would be playing Sayuri, people freaked out. See, Ziyi is Chinese -- not Japanese. "I'm not doing a documentary of the geisha world -- this is a fable," explained Marshall. "I'm very proud of an international cast. It is a celebration of the Asian community. I think it brings the world together."

The Frisky: Tiger Woods and 9 other surprise stars who are Buddhist

Evidently, this phenomenon has been going on for a long, long time. When Vivien Leigh was unveiled as Scarlett O'Hara in the 1939 classic "Gone With The Wind," people were not happy with the choice of a British actress to play a Southern heroine. One newspaper wrote that it was an ''outrage to the memory of the heroes of 1776 who fought to free this land of British domination.'' Leigh, of course, won the Academy Award for best actress that year.

By 1972, Marlon Brando had earned himself a reputation for being difficult -- a Hollywood bad boy past his prime. So fans of Mario Puzo's books where very unhappy when he was cast as Vito Corleone in "The Godfather." Paramount even responded to fan concern, with their president saying, ''I assure you that Marlon Brando will not appear in this film.'' You know what happened -- he did. He also won a best actor Oscar.

The Frisky: Do the women of "American Idol" have what it takes to win?