'New Moon' director gets away from frenzy 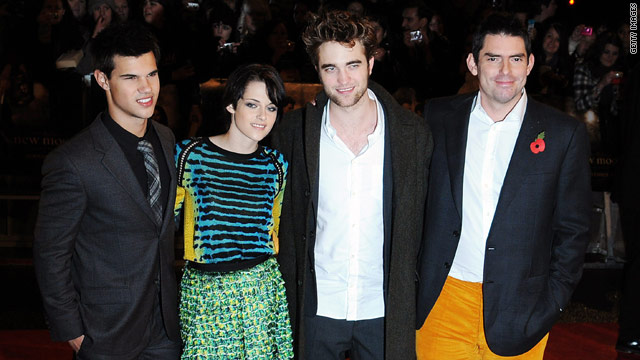 For the director of "The Twilight Saga: New Moon," though, the impetus for showing the moon phase properly in the shot that opens the film was an astrophysicist, not a Twihard.

"I went to a lecture by Neil deGrasse Tyson where he's complaining that they'd gotten the stars in 'Titanic' wrong," Weitz said. "So his voice was in the back of my head, that we had to get the phase of the moon properly."

"New Moon," which comes out on DVD Saturday, did a lot of things properly, indicated by the fans' support. Though "Twilight," the first film in the series, received respectful reviews and good box office, "New Moon" -- which continues the story of lovestruck human Bella and vampire Edward -- was the bigger blockbuster, outgrossing the first film by more than $100 million domestically and earning more than $700 million worldwide.

Weitz, who directed "American Pie" and "About a Boy," also had something to show besides moon phases. Coming off the disappointing "The Golden Compass," an experience that left a bitter taste in the director's mouth, he wanted to demonstrate he could take a popular book and make an equally popular film by being faithful to the source material.

Weitz talked to CNN about the "New Moon" frenzy, an embarrassing shot and those ungrateful actors. The following is an edited version of the interview.

CNN: For the DVD, what do you think the fans will appreciate the most?

Chris Weitz: What they'll appreciate most is certain scenes that didn't make it into the film. ... There's basically more Bella [Kristen Stewart], there's more Edward [Robert Pattinson], there's more Jacob [Taylor Lautner], and it's often sort of more extended versions of scenes where things are discussed at greater length rather than entirely new scenes. I think there's a lot of good stuff in the movie for fans, and at the same time we didn't want to get rid of any of their favorite scenes.

iReporter catches up with Chris Weitz at DVD release in California

CNN: At the time the movie came out, you said you were hoping to do the commentary with Pattinson and Stewart. What happened?

Weitz: They blew me off! (laughs)

Weitz: I have to say, they had a lot on their plates ... and there came a day when it was just me in a room, and I said, "I don't want to do this alone," so we managed to get my editor [Peter Lambert] on a satellite linkup, and we watched the movie together. And I think that it's frankly rather amusing, because we have a joshing relationship, whereas it may have been a bit more stilted had it been the kids and me, because they'd have to say nice things about me all the time.

CNN: When you watch the movie again, is it the kind of thing that you say, "Why did I make that decision?" perhaps because there was a deadline you had to hit.

Weitz: Well, there is that old saying, "A film is never finished; it's abandoned." But there's only one shot in the movie that embarrasses me, because every time I saw it in the movie, everybody laughed, even the most Twihard of them all. It's when you first see Bella has become a vampire, and she's running through the woods in this very diaphanous dress, and I guess my corny-meter was off that day. Everyone seems to find that terribly amusing.

CNN: How did a Cambridge-educated, nice, half-Jewish boy get involved with "New Moon" to start with?

Weitz: (laughs) Well, they asked. I think the first reason that I got involved was that I liked the actors very much. I think they're very good. Then I went to see the [first] movie in a little theater, and the response of the fans around me was amazing -- their degree of devotion, the delight they took in it. And you don't always get that as a director. You don't always know that there are going to be people watching and taking pleasure from what you're doing, so that's kind of a wonderful opportunity.

CNN: In the DVD commentary, you said you let the opening shot of the moon go on and on because you figured there would be 30 seconds of screaming when the titles came up. Was that true?

Weitz: The first time I saw it, there was quite a lot of screaming, just because of the buildup and anticipation were so great. People had been waiting so long to see it that it was good that they had a bit of time to calm down before you first saw Bella.

CNN: Were you reluctant to get involved in this, having come off "The Golden Compass" -- another big studio project, best-selling book series, where you had both fans who knew the books backwards and forwards and a studio that wanted a big hit?

Weitz: Well, no. I had something to prove, which was that if you really made a movie that was faithful to the book that it was going to succeed, and I felt that hadn't been the case on "Golden Compass." ... I knew I could do it properly if given the right kind of support. So there was a bit of redemption that I was looking for in that regard.

CNN: I don't want to get too much into "The Golden Compass," but do you think the studio was reluctant because of the atheistic themes in the original books?

Weitz: I think they were reluctant because there were any religious themes at all, actually. I still to this day really don't consider it an atheistic series of books, and in a funny way, I've bounced from a movie which, if anything, would be considered irreligious to a movie that some people consider to be a hidden advertisement for religion and chastity and all those things. But I think New Line was frightened of the source material. But that's crazy, of course, because if you're going to make a movie of a book, you should be familiar with the book's content.

CNN: Are you surprised by the Beatles-level frenzy that has surrounded the "Twilight" actors and the making of the film?

Weitz: I wasn't prepared for it, honestly. I knew it was a big deal, but it's one thing to deal with that conceptually and another to fear for their lives in the presence of thousands of teenagers. I was really astonished ... to encounter that level of devotion, and I'm very happy, I must say, to be able to lapse into complete obscurity again and never be recognized for the rest of my life.