A history lesson, on the rocks 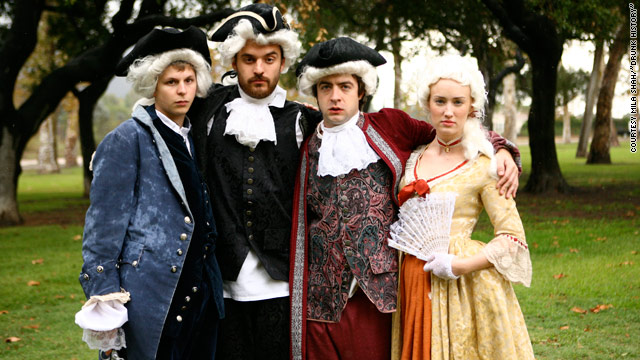 (CNN) -- To all the pronouncements made about history -- if you don't remember it, you're condemned to repeat it; it's a series of lies agreed upon; it's bunk -- it might be time to add one more: It's more entertaining when you're drunk.

At least, that's what Derek Waters and Jeremy Konner have found.

The pair of comedy writers and improv actors are the brains behind "Drunk History," a series of videos that began as a one-off joke but has become a feature of the popular website Funnyordie.com and its accompanying television show, "Funny or Die Presents." (The show airs on HBO, a network that -- like CNN -- is a unit of Time Warner.)

In each video, one of the pair's friends -- already inebriated -- tells the story of a historical event. That's then cut with a performance of the narrative by actors such as Michael Cera, Jack Black, Don Cheadle and John C. Reilly (in full period dress) and scored -- in best Ken Burns fashion -- with stately, swelling music.

The results are often a combination of historically accurate, absurdly silly and -- for the unfortunate imbiber -- somewhat embarrassing. (One lecturer, having consumed six beers and a half-bottle of absinthe, lost a good portion of the beverages to the "porcelain god" midway through the telling.) And the audience keeps growing: Episodes of "Drunk History" have received a combined 7 million views on YouTube and Funnyordie.com.

That's not to say the project doesn't take its history seriously, said Waters, 30. Though the narrators are generally comedians or writers, they're chosen not for their comedic skills but for their passion and storytelling prowess, he said.

"They understand there's a beginning, middle and end to what I have to talk about," he said. "Better that than someone at UCLA who likes a drink."

"Also, some of the people are real history buffs," added Konner, 29. "Eric Falconer [who narrated two videos about Benjamin Franklin] has read every book you can possibly read about Franklin. We could have made 10 'Drunk Histories' just from the night we talked to him."

Though "Drunk History" recently won a prize at Sundance, another sign of its popularity, the project remains a homespun affair, with Waters producing, Konner directing and a friend lined up to drink to his or her liver's content.

"Jeremy and I give them all their needs," Waters said. "And it's always at their house, so nobody's driving anywhere. We ask, 'What's your favorite drink that makes you very passionate about certain subjects?' "

"There's no intention for them to get sick," Konner added. "The intention is to get them sort of sloppy and not self-aware."

The pair, who met through mutual friends while doing comedy -- the two paired up working on a pilot for the "The Derek and Simon Show," with Simon Helberg and Bob Odenkirk -- credit the idea for "Drunk History" to a buddy, actor Jake Johnson, who was weaving a soused tale about Otis Redding.

"It was just a story I knew was bulls---, but I had no proof that it wasn't," Waters said. (In the story, Redding has a premonition of his death.) That story didn't make it to video, but the group decided to "take someone who's really smart, talking about history, where we know they're going to mess up."

Pal Mark Gagliardi answered the call with a story about the Aaron Burr-Alexander Hamilton duel. The video of Gagliardi was paired with a performance by Johnson as Burr and Cera as Hamilton, and Waters then presented the finished product at his show at L.A.'s Upright Citizens' Brigade theater.

Other aspects also came together by happenstance, like a real-life game of "Six Degrees of Hollywood." The two are friends with actor Cera, who responded to an instant message by agreeing to star in the first video. Konner was Black's assistant; Black starred in the second video. Reilly, a friend of Black's, e-mailed Konner, saying he was a fan. Waters knew Danny McBride ("Eastbound & Down"), whose sitcom is produced by Funny or Die co-creators Will Ferrell and Adam McKay.

"We're very fortunate to have our heroes knocking on our door," Konner said.

Indeed, Funny or Die latched on to "Drunk History" after Waters and Konner had made five videos on their own. When the Funny or Die website -- which uses some of the same actors -- cut a deal with HBO for the TV show, it requested two more "Drunk Histories" for the program.

At least one episode, starring Reilly as Nikola Tesla and Crispin Glover as Thomas Edison, has been taken off the Web due to rights issues, but the pair are passionate enough about their project to want to continue as long as possible.

" 'Drunk History' will continue. I like it too much to stop," Waters said.

Matt Carey contributed to this story.