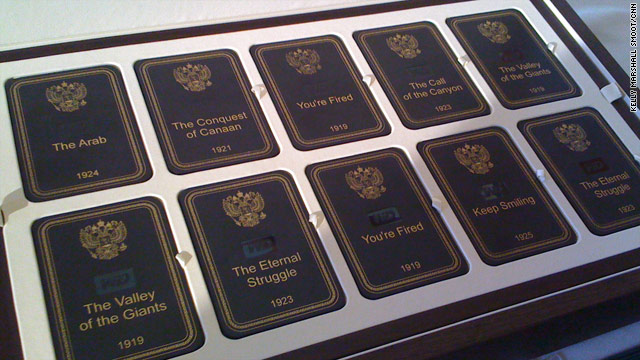 Washington (CNN) -- There weren't any starlets or red carpet, but the Library of Congress had a blockbuster day at the movies on Thursday.

The government of Russia presented the Library of Congress with digitally preserved copies of 10 silent films that previously had been thought to be lost forever.

According to the Library of Congress, more than 80 percent of American movies from 1893-1930 -- also known as the "silent era" -- no longer exist in the United States.

Like today's movies that are distributed to theaters around the world, many of those early silent films were circulated internationally. Over the past 20 years, the Library of Congress has discovered some of the missing films in international libraries and archives, like the Gosfilmofond, the Russian state film archive.

"A study published by the Library of Congress in 1993 concluded that the majority of U.S. movies from the 1920s survive only in foreign film archives," said Librarian of Congress James Billington.

He went on to explain that in the days of early American movie-making, many studios and theaters simply threw old movies away. Russia, he explained didn't generally throw them away. Many of the films sat in storage, making it possible for them to be preserved for restoration today.

Caroline Frick, curator of motion pictures at the George Eastman House museum of photography and film in Rochester, New York, said such film repatriation projects are exciting, with "a huge array of film history that still remains unknown because so many of the films don't exist."

Frick explained that Russia's digital preservation of American silent films is an example of how film preservation itself has changed, especially in the last 10 years.

"It used to be that you preserved on film but now we have a multitude of ways, including making digital copies so that the images are preserved."

Included in the restored movies is a 1923 film staring then-child-star Jackie Coogan, called "Circus Days," about a boy who runs away from his uncle to join the circus; and "Canyon of the Fools," starring Western movie star Harry Carey.

Billington accepted the digitally preserved movies on hard drives presented by Vladimir Kozhin, head of Russia's Presidential Management and Administration Department, at a ceremony Thursday. These ten films are the first of hundreds that will be repatriated over time.

The ten films presented Thursday, their studios and production year include: