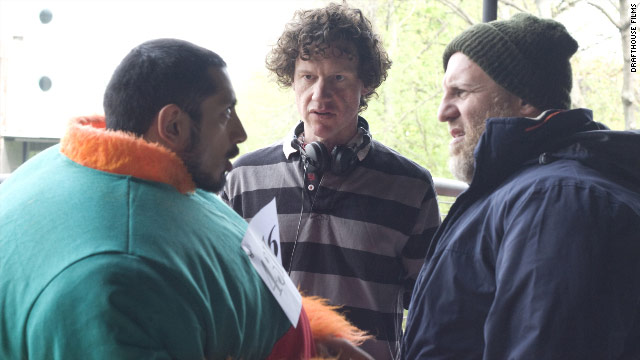 Chris Morris, center, on the set of "Four Lions," says audiences at screenings have been laughing at his film.
STORY HIGHLIGHTS
RELATED TOPICS

(CNN) -- Can terrorism be a source of humor?

Comedian Chris Morris certainly seems to think so. The British actor and funnyman recently debuted stateside his first foray behind the camera, "Four Lions," which follows the adventures of Omar, Waj, Barry and Faisal, a quartet of bumbling would-be suicide bombers.

Where's the joke in that, you may wonder? Well, Morris said he thinks that you'd be surprised and that he took very seriously the research behind the film, which included years of study and interviews with terrorism experts, imams and hundreds of other Muslims.

He recently spoke with CNN about his new project, how he ended up spending time with a man who fought alongside Osama bin Laden and what, if anything, he's willing to die for.

CNN: What inspired you to make this film?

Chris Morris: It was real life. You wouldn't expect me to say that, but it was basically encountering things I wasn't expecting to be funny in this subject area.

There were years of research, and I was reading a book by Jason Burke called "Al Qaeda" and paying attention to stories in the news.

One of the stories I noticed was about these group of Yemen jihadists who wanted to blow up an American ship by ramming it with an exploding boat. They put their launch in the water, thought it would explode and it sank. I thought, "They've got to be feeling a bit silly right about now."

I sort of imagined what their conversations might have been and who might be arguing with whom, and I started building it up from there. Mohamed Atta, who was one of the September 11 attackers, was so extreme that the others would call him "Ayatollah." You wouldn't even think there was room for an extreme of the extreme, but he was so extreme that if he started an Islamic discussion group it was sure to be dispersed within a few weeks because he would have fired them all for not being Islamic enough.

You just start to get a sense of this feet of clay thing going on with these guys.

CNN: It took you three years to research this project, correct?

It's all very well to say, "Well, these guys had a ridiculous plot, and it couldn't come off, or they forgot how to make the bomb or whatever it was," but to actually feel the context of that, you have to go on a bit of a journey. You've got to understand where Islam is coming from, how it's evolved, how it fits in to history and how it affected the people I was looking at, which were particularly British Pakistanis.

Pakistanis know that after the partition of India a lot of Pakistanis came over to live in Britain, and their sons' and daughters' sons and daughters are the ones growing up and forming that population.

I have to be honest. [Researching] was great fun because you hang out with so many interesting people.

CNN: When you were talking with these terrorism experts, imams and others, did you let them know that you were writing a comedy?

Morris: Yes. The people I cared [for] most were the people who didn't come with a title -- the people who got to know beyond that, and I would say, "I'm doing a comedy about a group of jihadists," and they would say, "Yes! Bring it on. We've been waiting for ages for someone to do this."

I didn't get that same sense from terrorism experts, who would say, "Oh, great" and then proceed to tell me supplementary stories about things they had experienced. These were guys on both sides of the pond who were willing to talk as long as the information wasn't case sensitive.

CNN: Did you have any feedback from anyone who thought the film wasn't a good idea?

Morris: Did anyone ever try to advise me against it? Not really, though I may have been deaf to that by that stage.

I think you come across people occasionally who would adopt a posture and be like, "This is a dodgy area," but you meet so many people who blow hard initially that you come to recognize pretty quickly who means what they say and who doesn't.

CNN: We are almost a decade from September 11 and a few years from the bombings in London. Do you think we are now at a place where it's OK to laugh at terror?

Morris: In a way that's not for me to say. All I can say is that the audiences in the States so far seem to think so, including in New York.

I've had two screenings in New York, where people were all over the film. I can't speak for them, but they laughed, which was a good sign.

I think, in a way, that question is when is a good time and that depends on how you are dealing with it. This film isn't gratuitous, and it's not trivializing what's important, and when people realize that, then it's OK to laugh.

CNN: Did you ever speak with or run across any actual aspiring terrorists?

Morris: No, but I spoke with a guy who fought alongside Osama bin Laden in the late '80s, early '90s, and he hung around in Afghanistan after the Russians had withdrawn and the groups started fighting each other.

He basically told bin Laden that he thought he had gone mad and that he profoundly disagreed with him. He was very informative because he could tell you the differences between what he was doing and what was happening now. He could discuss the fragmentation of the ideology and how you could become someone who could take up arms for Islam yet still disagree with bin Laden.

CNN: One of the things about one of the main characters in your film, Omar, is that he is so earnest regarding what he wants to do. Is there anything you feel you would be willing to die for?

Morris: (Laughing) Woo ho ho! Just like that? I've only known you for 12 minutes, and you are already asking me to lay down my life?

We all like to think that we would do it for the best possible reasons when the moment came. The truth is that I don't have any plans to lay down my life because I'm not built like that. I hope that if the situation came and other people were threatened, I would do the right thing.

You never know, do you? Whether you would run and hide or whether you would be plunging right in there? But I can assure you I don't have any immediate plans to form an ideology that I would just go and chuck myself in to -- aware that I wouldn't come out the other side.