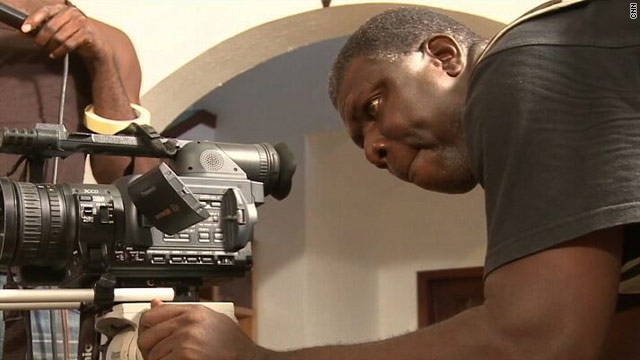 A new generation of movie makers aims to improve the quality of Nigerian films.
STORY HIGHLIGHTS

(CNN) -- Nigeria's "Nollywood" film industry is thriving, producing hundreds of movies every month. But a new movement is afoot among young directors who aim to compete with Hollywood on quality as well as quantity.

Nollywood eclipsed Hollywood as the world's second largest film producer last year and is snapping at the heels of Bollywood, India's movie-making machine.

Most of Nollywood's films are video-format B-movies, buzzing with vibrancy and innovation, but struggling with shoe-string budgets and low production values.

But now a new generation of filmmakers is hoping to reach a wider audience by launching a movement they call "New Nigeria Cinema."

Actor Wale Ojo, founder of the movement, told CNN: "New Nigeria Cinema basically means an elevation of Nigerian film -- high production values, good strong narratives, stories that capture the essence of who we are as Nigerians, as Africans.

"And it means also that these films can be shown at international film festivals anywhere in the world, from Toronto to Cannes to Venice."

Nollywood has only been around for 17 years, but it now produces about 200 films a month and has mushroomed into a $250-million industry.

It is a new movement, it's a renaissance, it's a rebirth if you like.
--Wale Ojo, founder of New Nigeria Cinema
RELATED TOPICS

Stories often fuse themes of traditional voodoo and magic with urban romance and are hugely popular throughout Africa. But the films face an uphill climb to achieve global presence and acceptance.

"Nollywood as it was before now served a purpose; that purpose is to give Africans a voice, which is why it's very popular amongst other African countries," said Obi Emelonye, London-based director of "Mirror Boy," which tells the story of a London-born teenager's journey to Gambia.

"But Nollywood had a limitation in that, because of the style of production, because of the 'can't do' attitude of the producers and the lack of very high-level training, the quality wasn't great," he added.

By retaining what he calls the "quintessential African voice" while raising production values and the quality of screenplays, Emelonye hopes the industry will start to produce "a kind of a creme de la creme of Nollywood."

Director Omelihu Nwanguma, whose film "Area Boys" is about criminal gangs on the streets of Lagos, thinks the film industry also offers a chance to hold a mirror up to modern Nigerian society.

"A whole generation of Nigerian youths [are] sucked into this world of crime and corruption and in 20 years they'd be the leader of the country and that's all that they would have learnt, that's the education they would have had, so what kind of leader would they be?" Nwanguma said.

"So I didn't necessarily pose those questions in the film, but I wanted those questions to be talked about rather than just going, 'oh that was a really good comedy.' I wanted people to ask 'what's going on in our society, what are you doing to the youth?'"

One of the biggest challenges for Nigerian directors is raising money.

"No matter how good your idea is you need money to make it and with organizations like the now defunct UK Film Council, it was an uphill task getting green-lighted for productions," said Emelonye.

"So you have to find other alternatives to funding using your own money, like I've done in the past, to get a certain level of credibility."

The industry is also hobbled by piracy. Nollywood producers estimate that up to half of the industry's profits are being lost to Nigeria's piracy and corruption problems.

With virtually no formal cinemas, film-crazy Nigerians end up watching the films on pirate DVDs in informal screenings.

But the future is looking up for the new wave of Nigerian directors. Hollywood has shown an interest in Nollywood's global popularity, with the first joint production being made last year.

And the British Film Institute in London recently hosted a day for New Nigerian Cinema, bringing together directors and film makers to brainstorm ways to achieve higher standards that can compete at international film festivals.

"It is a new movement, it's a renaissance, it's a rebirth if you like -- perhaps even a throw back to the 70s but obviously with a very, very modern tint, a very modern glaze to it -- and it's exciting," said Ojo.

Charlotte McDonald-Gibson contributed to this report