10 movies not to miss this holiday season 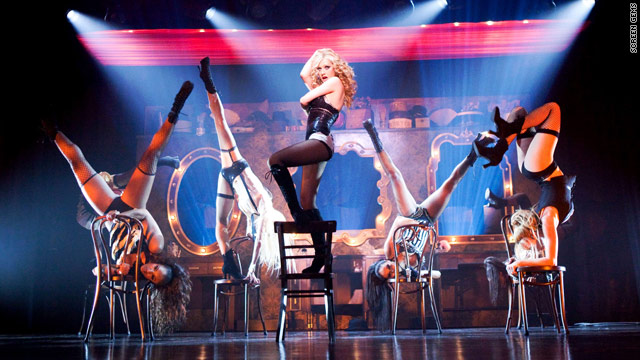 (CNN) -- 'Tis the season, for movies, that is! This holiday season is introducing audiences to a whole new crop of flicks guaranteed to drive you to a theater, despite the $10 ticket. Check out the movies taking 2010 out with a bang.

Christina Aguilera stars as a small-town girl who goes to Los Angeles, California, to perform in a musical revue run by Cher, an Oscar-winning actress who hasn't starred in a film in a decade.

In real life, Cher has reportedly been helping Aguilera through her divorce. But things are looking up for Aguilera, who got her star on the Hollywood Walk of Fame right before the movie's premiere on November 15. "Burlesque" will be released November 24 and also stars Stanley Tucci, Kristen Bell and Julianne Hough.

"Love and Other Drugs"

In this flick, which also opens November 24, a pharmaceutical salesman (Jake Gyllenhaal) begins a relationship with a woman who has Parkinson's disease (Anne Hathaway).

The movie is loosely adapted from Jamie Reidy's book "Hard Sell: The Evolution of a Viagra Salesman" and features Gabriel Macht, Hank Azaria and Oliver Platt.

The plot of this movie follows an Australian speech therapist who tries to help King George VI of Britain overcome a speech impediment.

After dominating the film-festival circuit, "Black Swan" is coming to theaters December 3.

The sexy film tells the tale of the relationship between a veteran ballet dancer and her rival. Natalie Portman is expected to earn a best actress nomination for her performance as a mentally unstable ballerina and co-star Mila Kunis is getting Oscar buzz as well.

"The Chronicles of Narnia: The Voyage of the Dawn Treader"

It takes a legend to make a star

Due in theaters December 10, Lucy (Georgie Henley) and Edmund Pevensie (Skandar Keynes) are drawn back into Narnia with their cousin Eustace (Will Poulter) to help Caspian (Ben Barnes) find seven lords while aboard the Dawn Treader ship.

This is the third film based on C. S. Lewis' books, and reportedly Barnes' favorite of the seven tales.

The first Narnia film, "The Lion, the Witch and the Wardrobe" is the 35th highest grossing movie worldwide of all time.

The film might hit a bit too close to home for some people in the recession, but critics are giving it solid reviews.

Mark Wahlberg's passion project hit theaters December 10. The film takes a look at the true-life story of boxing hero ''Irish'' Micky Ward and his brother (played by Christian Bale) who helped train him before going pro in the mid-1980s.

Opening December 10, Angelina Jolie and Johnny Depp star in this highly anticipated film in which an Interpol agent draws a tourist into a web of intrigue. We expect ladies and gentlemen to flock to theaters in hopes of seeing two of the world's most beautiful people lock lips, even if it's only rated PG-13.

"How Do You Know"

How do you know when you're in love? In luck? In trouble? If you're in the mood for a lighthearted chick flick, check out Oscar winners Jack Nicholson and Reese Witherspoon in this romantic comedy, hitting theaters December 17.

In the film, Witherspoon is caught in a love triangle involving a baseball player (Owen Wilson) and an old friend (Paul Rudd.) Our favorite line from the trailer? "I think I'm in love with somebody when I wear a condom with the other girls."

It's, as the tagline says, "The perfect love story. Until it became the perfect crime."

"All Good Things" is a love story and murder mystery based on the most notorious unsolved missing person's case in New York history. It was inspired by the story of superwealthy Robert Durst, who was suspected, but never tried, in the death of his wife, Kathie, who disappeared in 1982 and was never found.

The film stars Ryan Gosling, Kirsten Dunst, Kristen Wiig and Frank Langella and will first be released in New York on December 3.