Coming to a movie theater near you 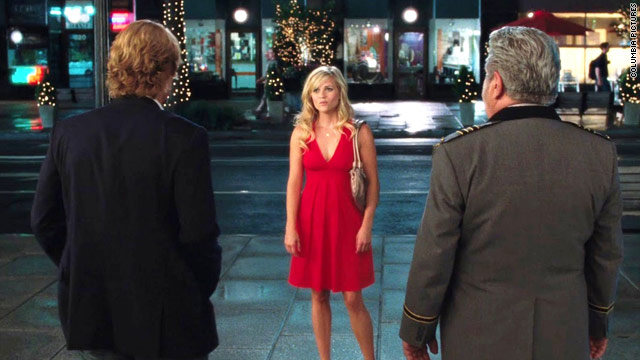 Reese Witherspoon teams up with Owen Wilson, left, in "How Do You Know." Paul Rudd and Jack Nicholson also star.
STORY HIGHLIGHTS

(CNN) -- Need a break from shopping and celebrating the holidays? There will be lots of offerings at your local cinema as Hollywood is releasing a crop of new films through the end of the year.

Plot summary: A small-town girl goes to California to perform in a burlesque musical revue.

Plot summary: An ex-con out to avenge his brother's murder must also deal with a hit man and a police officer hunting him.

"Love and Other Drugs"

The stars of 'Love and Other Drugs'

Plot summary: A pharmaceutical salesman begins a relationship with a woman who has Parkinson's disease.

Plot summary: Love inspires the long-haired Princess Rapunzel to leave her tower in this reboot of a beloved fairy tale.

"The Legend of Pale Male"

Plot summary: Documentary about a red-tailed hawk who becomes a famous resident of New York.

"The Nutcracker in 3D"

Plot summary: The classic story of girl whose gift comes to life one Christmas Eve gets a modern, 3-D twist.

Plot summary: A parolee battles with a gangster for the affections of a movie star.

Travers: 'Back Swan' one of year's best
RELATED TOPICS

Plot summary: Inspired by one of the most notorious unsolved crime cases in New York history, the film is part murder mystery, part love story.

Plot summary: A group of Hollywood assistants struggle to get a film made.

Plot summary: A thriller in which a ballet dancer finds herself pitted against a newcomer as they both compete for the ultimate role.

"I Love You Phillip Morris"

Plot summary: A con man meets the love of his life behind bars.

Plot summary: A young man attempts to unravel a past that is haunting him.

Plot summary: A detective's investigation of a boy's murder leads him back to his hometown.

Plot summary: In 1976, a young man returns after years of being away to the race-torn Philadelphia neighborhood where he grew up.

Plot summary: A master swordsman seeks sanctuary in an American town after refusing a mission.

"The Chronicles of Narnia: The Voyage of the Dawn Treader"

Plot summary: Lucy, Edmund and their cousin Eustace are drawn to Narnia again.

Plot summary: Three men try to survive during a year in which their company undergoes corporate downsizing.

Plot summary: The story of the early years of boxer "Irish" Micky Ward and his brother before the former went pro in the mid-1980s.

Plot summary: An Interpol agent draws a tourist into a web of intrigue.

Plot Summary: A troubled young woman is released from a psychiatric hospital and lashes out at the world with a series of self-destructive acts.

Plot summary: Based on Shakespeare's play, a vengeful sorceress unleashes her powers against shipwrecked enemies.

"And Soon the Darkness"

Plot summary: Two American girls bike in a remote part of Argentina when one disappears and the other must find her before it's too late.

"How Do You Know"

Plot summary: A woman is caught in a love triangle involving a baseball player and an old acquaintance.

Plot Summary: A man and his wife struggle to come to terms with the accidental death of their 4-year-old son.

Plot summary: A documentary filmmaker travels to Jellystone Park where he discovers Yogi and Boo-Boo.

Plot summary: A man is haunted by the disappearance of his father, a world-renowned video game developer.

Plot summary: The Focker family prepares for the arrival of a baby.

Plot summary: A Hollywood bad-boy re-examines his life after an unexpected visit from his young daughter.

Plot summary: A teenager enlists the aid of a boozy, trigger-happy lawman to find her father's killer.

Plot summary: A shipwrecked travel writer is a giant in Lilliput, land of little people.

Plot summary: An aging magician bonds with a young fan who believes his tricks are real magic.

Plot summary: A happy middle-aged couple are hit with life's highs and lows over the span of four seasons, including embracing their son's newly discovered partner and enduring an unexpected death in the family.

Plot summary: A crook with a terminal illness tries to set his affairs in order.

Plot summary: Kevin Spacey stars as Washington lobbyist Jack Abramoff, whose greed and corruption get him in a heap of legal hot water.

Plot summary: Past events haunt a former Mossad agent when she returns to Eastern Europe to investigate the apparent reappearance of a Nazi war criminal she thought was long dead.

Plot summary: This drama follows a group of soldiers who escaped from a Siberian gulag in 1940.

Plot summary: A respected hit man is thinking about retirement and starting a family when he meets a beautiful thief who may shake up his plans.

Plot summary: A love story centered on a couple who try to save their marriage amidst the romantic memories of their past.