'Juan of the Dead' fends off zombies in Cuba Suddenly, dozens of bloodied figures lurch into view, some with empty eye sockets, others dragging limbs behind them.

It's another day on location for "Juan of the Dead," Cuba's first zombie movie, a mix of camp gore and wry satire.

In this version, the communist government blames the zombie invasion on U.S.-backed dissidents intent on destabilizing the country.

The hero Juan is an unemployed loafer who sees a chance to make a buck. For a price, he and his partner will eliminate your possessed loved ones for you.

The writer-director calls it a zombie comedy, but also a very Cuban movie. 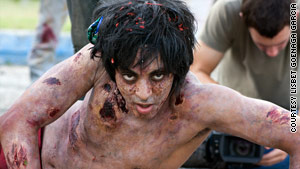 Actors film "Juan of the Dead" in Cuba.

"We always do the same thing in the face of trouble," Alejandro Brugues told CNN. "First we try to make some money out of it. Then we try to leave the country. And that's what our heroes do throughout the film."

When the living dead overrun the city, Juan and his partner convert their car into a raft and must decide whether to flee Miami, Florida,­ recalling a real-life incident in 2004 when would-be Cuban migrants hit the Florida straits in a floating 1959 Buick.

The pre-production teaser promises: "Fifty years after the triumph of the Revolution, a new revolution is about to begin."

It also features pictures of its hero Juan alongside Cuba's independence fighters and the likes of Che Guevara. 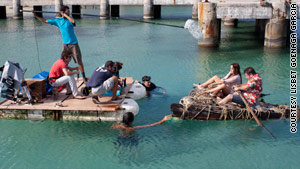 The film gently pokes fun at the island's political rhetoric

It is the second film for 34-year-old Brugues and his young partners, who created their own production company called "5a Avenida" or "5th Avenue."

"For four years we were the only ones who believed in our project," says co-producer Inti Herrera. "All of sudden you have a hundred people on the set and all these collaborators."

They got the backing of Cuba's official Film Institute and also signed up Spain's La Zanfona Producciones.

And they cobbled together a $2.3 million budget, big by Cuban standards, mostly to finance special effects, which will be added in post-production.

"I think in some ways, it makes sense that this whole idea was launched by a group of young people," said another co-producer Claudia Calvino, 27. "We aren't afraid, so we just jump right in and keep pushing until things get done." 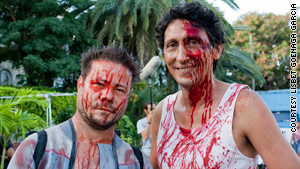 On location, "Juan of the Dead" is a mixture of sophisticated equipment and low-tech Cuban know-how.

On location, "Juan of the Dead" is a mixture of sophisticated filmmaking equipment, much of it from Spain, and low-tech Cuban know-how.

When producers ran into problems getting permission to use a boat to film some water scenes, they set their cameras up on Styrofoam rafts borrowed from local fishermen.

And when it came to making the zombie-mobile, they did what so many Cubans do: They found an old 1950s American car rotting in a garage and tinkered until it was road-ready.

The movie will be ready to hit theaters next year, but filmmakers are hoping to secure a coveted spot at one of the prestigious film festivals first.