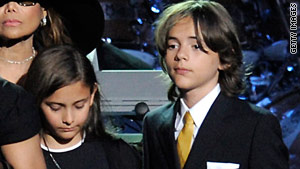 It would be the first public appearance for Prince Michael, 12, and Paris, 11, since their dramatic appearance at the memorial service 12 days after their father's death last summer.

The children were to appear at a much smaller Grammy event Saturday night to accept their father's Grammy Lifetime Achievement Award, but Katherine Jackson -- their grandmother and legal guardian -- agreed to the change, a spokesman for the pop star's father said.

Instead, former Jackson manager Frank Dileo made the Saturday night appearance. He also told CNN the Jackson children would be at the Sunday night tribute.

No family members had been invited to take part in either of the Grammy tributes to Michael Jackson until last week when the Jacksons complained, a family source said.

"However, there has been some recent rumors that I am displeased with the idea that Michael's children are accepting the award on my son's behalf," Joe Jackson said in a statement to CNN. "On the contrary, I am very proud of my grandchildren. Katherine and I are the ones who initiated their participation."

The youngest of the three, 7-year-old Blanket, is not expected to attend the show, although that could change, a family source said.

Jackson's oldest son is expected to read a statement on behalf of the family during the Grammy tribute, the source said.

When Paris Katherine Jackson delivered a spontaneous speech at the massive memorial in July, it was the first time the public had heard from the children. They were often hidden by veils or blankets when seen with their father.

"Ever since I was born, Daddy has been the best father you could ever imagine," she said. "And I just want to say that I love him so much."

Singers Carrie Underwood and Smokey Robinson are among several stars who will take part in the musical tribute.

A segment of a 3-D video produced by Jackson shortly before his death will be shown. It was based on his pro-environment "Earth Song" for use in his "This Is It" tour.

Michael Jackson was 50 years old when he died June 25, 2009, just two weeks before he was to begin a long series of comeback shows in London.

The Los Angeles County coroner ruled his death a homicide resulting from a combination of drugs, primarily Propofol and Lorazepam.

A criminal investigation has focused on Dr. Conrad Murray, his personal physician who was with him when he died, although no charges have been filed.