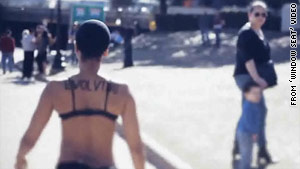 Los Angeles, California (CNN) -- Erykah Badu shed her clothes as she walked along a Dallas, Texas, sidewalk until she was nude and then fell near where President Kennedy was assassinated.

The result was a controversial video, released Saturday, for her song "Window Seat," which Badu said was "shot guerrilla style" with no crew and in one take March 17.

Children could be seen nearby as Badu stripped in Dealey Plaza, a popular tourist spot since Kennedy's 1963 assassination.

The singer's management did not immediately respond to request for comment, but Badu responded to the controversy via Twitter.

Badu will not face indecent exposure charges for shedding her clothes on the Dallas, Texas, sidewalk, a Dallas Police spokeswoman said.

Although children were nearby, no one filed a complaint against Badu after the March 17 incident, Dallas Police Senior Cpl. Janice Crowther said.

"But if we had had a call and would have caught Ms. Badu in the act of walking down the street taking her clothes off, she would have been charge with a Class B misdemeanor," she said.

The R&B singer said she was making a statement against "groupthink," which she tweeted was an "unwritten rule" that "i will not express my true opinion if it opposes those i love and fear."

One fan tweeted to Badu on Sunday: "thank you, because your being brave, i no longer feel afraid to say what i really feel."

In the video, Badu is behind the wheel of a 1965 Lincoln Continental, parked along Kennedy's route. A single camera focuses on her as she walks toward Elm Street and the book depository where Kennedy's assassin fired his rifle.

Badu tweeted that "i was petrified while shooting this video ... but liberation began to set in. i conquered many fears in that few moments."

She said she was "too busy lookin for cops" to be embarrassed by her nudity. "i been naked all along in my words actions and deeds. thats the real vulnerable place," she tweeted.

The video does not include shouts from people off camera, she said. "they were yelling, 'THIS IS A PUBLIC PLACE : YOU OUGHTA BE ASHAMED : PUT YOUR CLOTHES ON : DAMN GIRL! etc," Badu tweeted.

More than a dozen people stood along the plaza's "grassy knoll" when Badu took off the last piece of clothing.

"the people caught in the shot were trying hard to ignore me," she tweeted.

As she reached the spot where Kennedy was first struck by a bullet, the crackle of a gunshot is heard and Badu's head snaps back and she falls to the ground as if dead.

Badu said when the camera stopped "we ran."

The singer was born in Dallas, where she is raising her three children -- ages 1, 5 and 12

She tweeted to fans about her 5-year-old daughter's response when told of her plans for the video: "she looked at me with a blank face and replied ok mama can i have another pudding?"

The video was released days before the singer's next album, "New Amerykah Part Two: Return of the Ankh," hits record stores. The single "Window Seat" is at No. 28 on Billboard's R&B/hip-hop chart.