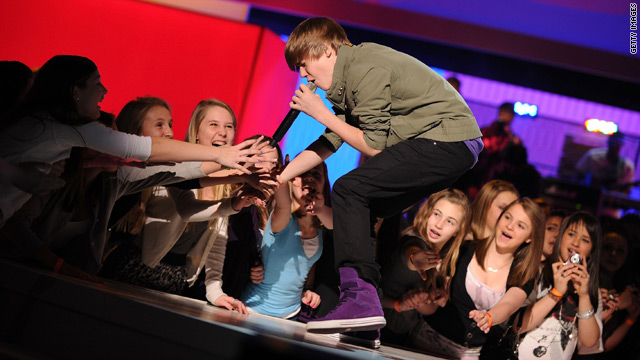 (CNN) -- The Justin Bieber strain of fandom is so strong, it's kept his name in the top 10 of Twitter trending topics for weeks on end, has caused injuries resulting from a mall melee, and has even led to an arrest.

Bieber's manager, Scott "Scooter" Braun, was arrested last week on charges of reckless endangerment and criminal nuisance, brought against him after The Fever took over a Long Island mall last November, according to The New York Times. Braun was accused of taking too long to send a message via Twitter that the appearance had been canceled. Authorities were hoping that tweet would stem the crowd of 3,000 overtaking the storefront where Bieber was scheduled to appear.

But if you've paid any attention to popular culture at all, that story isn't surprising. Bieber has been all over the place: on MTV, on top 40 radio, even chatting up the ladies on "The View." The kid is practically a popularity magnet.

So what is the big deal? Is it the perfectly side-swept hair, the swoon-worthy swagger, the flirtatious -- and remarkably consistent -- tweets to his fans?

It's all of that, plus the fact that he's actually talented, music insiders say.

Yahoo! Music editor Billy Johnson Jr. admitted that when he first listened to Bieber, he was reminded of the late King of Pop.

"The tone of his voice and the way that he sings, it made me think of Michael Jackson," Johnson said. "I almost thought, should I not say this? But he's good. He can really sing."

If you're not a "Belieber" just yet, Rap-Up editor Devin Lazerine says the singer's vintage YouTube clips are worth a look; a younger Bieber held his own crooning covers of Chris Brown, Ne-Yo and Usher songs. These videos not only helped Bieber develop a homegrown fan base, but they also helped him gain a bit of respect from those who would dismiss him as another product of the pop music factory.

"Older adult audiences can see when someone is trying to sell you something and shove it down your throat," Lazerine said. "This is a little more organic, because he kind of did it himself -- he got on YouTube. I almost wonder if YouTube should get a cut of this, because that's how he got here."

After being discovered on the site by his manager, Bieber was then introduced to Usher, who, after initially passing on hearing the teen sing, got into a bit of a bidding war with Justin Timberlake and ended up being the one to take Bieber on as a protégé. It's given the teen a stamp of credibility that other YouTube stars haven't been able to claim.

"Usher is an established and respected pop star, and if he's endorsing this 16-year-old kid, the rest of us think that we should take notice," Lazerine said.

Bieber's management team has wielded that cred wisely, said Billboard magazine's Monica Herrera, because they took their time building his name from YouTube to the music charts, mainly with the help of Bieber's growing fan base.

"He was growing slowly, and the fans saw that -- they felt like they were playing a role in building him to become a star," Herrera said. "They became invested in championing him, whether it was buying his albums or watching his videos or tweeting about him, they all had a stake in wanting to keep him in the limelight."

While Bieber hasn't exactly crossed over entirely into an adult demographic, "there's an awareness of him now. You can't argue that that's happened, in the past month especially."

Between Bieber's hit single, "Baby," his lead part in the remake of "We are the World" in February, appearances on shows like "Chelsea Lately" and his takeover of the fairly adult humor Web site FunnyOrDie.com, the teen is inescapable even for adults who don't have kids.

"We wanted to do something to trump Reba McEntire's [takeover of the site last year], and we called up Team Bieber to do 'Bieber or Die,' " explained Funny or Die's head of production, Mike Farah. "Obviously, we know how big he is and how big he is online, and what [Web] site wouldn't want to be a part of the Bieber phenomenon right now? He's everywhere, and he's actually really, really talented. This is his moment."

"He's got four times as many songs out as other people do right now, and he tweets about four times as often, if not more, as any other celebrity," Herrera said. "That constant feeding of content to his fans is what keeps him there. People want to feel like they're buying into him, and tweeting about him is an active decision on their part to keep him a trending topic."

Bieber shows his appreciation by re-tweeting messages from his 1.6 million-plus followers on the social network site with a personal note, or giving a "random late-night shout out" to the his female fans, encouraging his fans to get in a dialogue with him. That accessibility has made him a mainstay, said celebrity blogger Jared Eng of JustJared.com and JustJaredJr.com.

"People consider him a best friend, like another version of Taylor Swift," Eng said. "There's nothing sexual about them -- adults can take their kids to see their concerts, and they're nonthreatening."

But while Swift may have to contend with other young female pop stars for popularity, Bieber has "saturated the teen market," Eng said. "He's the only white, young male singer that girls can idolize. There's no one else in that market space other than the Jonas Brothers, and one of them is already married, and another one has a girlfriend."

The demand for Bieber feels new, Herrera said, because it's something we haven't seen in a while, since the days of the boy bands, but in many ways, "this is the traditional model of teen pop stardom," she said.

"If you look at old Donny Osmond videos, they have a very similar vibe going on. It's just a post-millennial version of that. It's manifesting in a very old-school way, it's just through these modern mediums that we're using now. If Twitter had been there when New Kids on the Block was around, they totally would've been high up in the trending topics."

Bieber's star is so high, it's hard to imagine where he can go from here, but Yahoo Music! editor Johnson believes that if he plays his cards right, he can have the career of the pop star who once wanted to sign him: Justin Timberlake.

"People laughed at 'N Sync the way that people laugh at Justin Bieber -- the music purists who dismissed 'N Sync as a group that wouldn't be able to move beyond the teen pop market -- but look at what Justin Timberlake has done," Johnson said.

"Timberlake crossed over on so many platforms, and in a lot of ways, Bieber is doing that now, by working with Ludacris," he added. "You never know what will happen, but if he keeps a level head and allows his music to grow naturally, he'll be OK."