Where are the modern-day 'Runaways'? 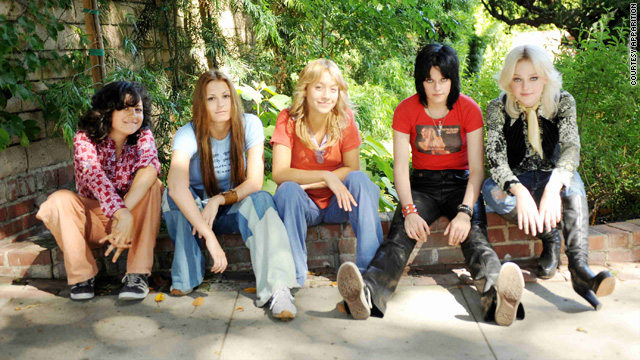 The biopic "The Runaways" paints a picture of the all-female rock band that paved the way for female rockers today.
STORY HIGHLIGHTS

(CNN) -- There's a scene in "The Runaways" -- a biopic based on the Joan Jett and Cherie Currie fronted 1970s band -- where the group's manager informs them that the only place men want to see women is in the kitchen or on their knees.

Much has changed since The Runaways became the first all-girl rock group, and the evidence lies in the vast number of female-centric bands that followed in the next 30-plus years, many with large, devoted followings.

And yet, in the midst of that progress, a group of women getting ready to perform at a venue can still be met with confused stares, said Linda Lou, the lead singer and guitar player of Los Angeles-based band Cockpit.

"It's a tough business; it's hard for everyone, male or female, but we do have our own problems," Lou said.

"There was a time when we were loading the van [with our equipment], and there were guys outside of a bar who asked, who's dating who," the 29-year-old Los Angeles, California, transplant recalled. "Who dates who in the band?"

When they explained that they were the band, the guys were "really confused; they really thought we were helping our boyfriends load the equipment. I was like, 'Is it that hard to imagine?' "

It shouldn't be. Women in rock have a long and respected history, from the rule-breaking Runaways in the '70s to The Bangles and The Go-Go's in the '80s. The '90s brought the Riot Grrrl movement, where all-female bands created a genre in which punk meshed with politics, and the turn of the 21st century saw the popularity of California-bred band The Donnas, whose single "Take it Off" was a radio mainstay in 2003.

So perhaps a few imaginations will be stretched as "The Runaways" opens nationwide, but the movie also highlights that the visibility of all-girl bands has shifted in the past decade, as well as the genre's sound.

"We're going through a moment where a pop diva, or the mainstream bad girl, is what's acceptable. These people are sort of appropriating the ethos of the girl guitar rocker, but it's still a very mainstream, acceptable version of it," said RollingStone.com's executive editor Abbey Goodman.

"What's interesting about The Runaways is that it was very aggressive -- it challenged the norms of rock and roll and female sexuality, and I don't see that so much," Goodman said. "These women are challenging it, but they're not truly threatening."

Without visibility, the future can start to look much like the past, Lou said, which is why she purposefully formed an all-female band.

When she was growing up, "there was never an all-female band that I looked at and said that's what I wanted to be. They were always guys -- bands like Judas Priest and Aerosmith and Def Leppard," Lou said.

"We thought it would be fun because we didn't see it out there anymore," she added. "Unfortunately, there aren't that many girls that want to live this lifestyle. Or, they may want to, but they're afraid to. There are so few role models, so they might think it's not a possibility."

"You have the '90s with strong, colorful women like Courtney Love, and I think it sort of shifted with the Spice Girls and this canned idea of empowerment, and rock went back to its all male roots," Shepherd said.

Lately, she said, with the spate of books written about starting an all-girl band coupled with the numerous schools devoted to teaching girls how to rock opening and the rising national awareness of groups like the Dum Dum Girls and the Vivian Girls, we could be heading back into a time where the all-female rock band is part of the mainstream.

Yet you have to remember the state the music industry is in, she added. Becoming a superstar of Billboard chart-topping proportions doesn't happen with as much regularity. The industry has "changed so much that it doesn't matter if the band is massive," she said. "There are plenty of all-girl bands that are in different pockets and scenes; you just have to look for them."

"Just because we don't have a 'Runaways' on the Top 20 chart, doesn't mean that women aren't working or that they're not what people want to see," Sabin said. "My business has been here for 19 years because people want to see women rock."

The label began in 1991 with venerated rockers like Bikini Kill, and has grown steadily since, and is still a haven for female musicians. In fact, she added, about 80 to 90 percent of their roster are bands that are all women or fronted by women.

"There's a difference between major label music and the actual state of what's going on in music, because there's been a lot more women playing in general," Sabin said. "There were a lot of things happening in the 2000s that were in place for the Donnas to become popular. We're coming out of a recession, so [labels are] not taking a chance. They're sticking to Mariah Carey and 'American Idol,' where you pre-sell the package."

Lou said that while the genre's glass ceiling is still unfortunately there, it is getting better. "In the hard rock genre, you're starting to see extreme metal bands with guttural singing with a lead female singer," she said. "You wouldn't've seen that a few years ago."

There's also someone like Courtney Love, who "still has that swagger, and she's back with a new album and a new tour," Goodman said. Still, Love "was one of those people who always stood up for the female guitarist, but she's still part of the second wave," Goodman added. "I don't know if there's a whole new crop of women who are picking up guitars."

Part of that could be because rock and roll as a genre isn't as big as it used to be, Shepherd said.

"With computers and synthesizers, even in the early 2000s there were a lot more women making electronic music, which I think is a lot more revolutionary," Shepherd said. "Guitars and rock are thought of as the parlance of men, but there's a double stigma with computers and have been historically, and I think that women controlling that is more revolutionary and certainly more current."

Whether it's electronica or metal, though, the topic of gender in stereotypically masculine music genres should neither drown out the music -- which should always come first, Lou said -- nor be ignored completely.

"We take for granted how many things boys can do that girls can. It's a message that still needs to be told, and we don't get preachy like that because we think that girls know that they can be whatever they want to be, so it isn't being said as explicitly right now," Goodman said.

For Sabin, the true point of equality will come when gender is no longer a question at all. While she believes that the discussion still needs to be pushed forward as feminism, in her view, it has taken a step backward as of late, she still looks forward to the day when "we just like the bands that we like," and no adjective calling out a band's gender required.

"A lot of the bands playing out of Brooklyn right now, you never hear that there's a woman in the band, and she's doing something that's not typically female like songwriting or playing drums," Sabin said. "If that can continue, that would be revolutionary."