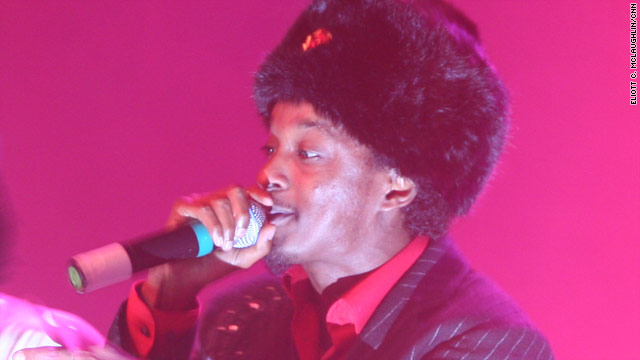 (CNN) -- The Somali-born K'naan could be excused if he heeded hip-hop's code of violence.

Rappers often use their upbringings in Compton or Brooklyn as excuses to glorify gunplay, misogyny and drug trafficking. They're just keeping it real, they say.

By the same logic, growing up in Mogadishu -- arguably the most broken and bloody city on Earth -- provides license to make mayhem an overriding theme of your music, right?

Nope, said the 31-year-old rhymesmith, who finds himself frustrated by many messages in hip-hop.

K'naan can't dwell on violence in his songs -- not because it's reprehensible, he said, but because it was too ever-present a force in his upbringing.

"I've always been of the opinion that you cannot glorify that which is normal, that which is too often seen," he explained. "You can't make cool something that is so vast."

When K'naan was young, the "cool kids" in Mogadishu didn't pack heat. They chatted up girls.

"We looked up to those guys because a lot of the kids I grew up with, there wasn't a choice but to be tough, but to carry weapons," he said.

K'naan said he understands the "posture element" to American hip-hop, as well as the reasons rappers burnish their street cred with tales of popping caps and moving kilos.

It's a testament to the safety of American cities, he said.

"You don't have kids who are 8 years old walking around with AK-47s in the street," he said. "Here, you have pockets, of course, that are struggling -- without a doubt -- and that have a lot of violence, but it's still pockets. ... When you do put your mind to it, you can make it. You can get out of the violence. For [Somalis], you cannot get out of the violence. There's just nowhere to go."

Born Keinan Warsame, the rapper said he and his brother, Libann, were "little troublemakers" in their Mogadishu neighborhood. K'naan knew how to fire an assault weapon at age 8. At age 11, he accidentally blew up his school with a hand grenade he mistook for an old, dirty potato.

The violence in his homeland became more palpable after gunmen chased him and three friends through the streets of Mogadishu. K'naan escaped. His friends were slain.

K'naan made another narrow escape in 1991 -- this time, from Somalia's civil war. He, his mother, brother and sister boarded one of the last commercial flights out of Somalia, moving first to Harlem, then to the Muslim enclave of Rexdale in Toronto.

The culture shock was troubling enough on its own, but K'naan, whose name means "traveler" in Somali, spoke only a few rudimentary words of English.

This would never do for a precocious 14-year-old lamenting the state of his homeland and those he left behind. K'naan needed to express himself.

"I think that really was the birth of music for me," he said.

Dissecting metaphors and similes in American hip-hop, K'naan grasped for their true meanings and how he could use the different words and idioms himself.

"I'm talking about really good rappers like Nas and Rakim, like poets, not the guys who can't string two sentences together," he said.

You can hear such lyricists' influence in K'naan's music, which embraces live instrumentation over turntable backbeats. His tracks also combine elements of pop, rock and folk music, as well as West African time signatures, Ethiopian jazz riffs and Somali melodies and drums.

No genre is off limits, as he's teamed up with reggae and R&B stars, and his collaboration résumé includes joints with rappers Nas and Mos Def, Metallica's Kirk Hammett, Maroon 5's Adam Levine and British rock trio Keane.

Coca-Cola so appreciated the universal appeal of K'naan's music that it made "Wavin' Flag" its official anthem of the 2010 World Cup. Sixteen remixes were cut to accommodate French, Brazilian, Arabic and other markets.

A little fame, however, has not dampened K'naan's ambition to "reform" hip-hop, nor has it dissuaded him from being selfish in his music.

He targets no audience in his compositions. He writes songs for himself, he said, to answer his own frustrations. Any acclaim only bolsters his notion that it's OK to be personal in his songwriting, he said.

" 'They would like this' is not a thought that comes to me in the studio," he said. "I always create these things, and then I end up giving them. It's a good relationship I think I have with the world because of that."

K'naan's lyrics are thoughtful, often provocative, such as when he spits, "If I rhyme about home and got descriptive/I'd make 50 Cent look like Limp Bizkit."

That to me is important, to never claim a position too smart for the listener. I think it's important to reach everybody.
--K'naan, rapper
RELATED TOPICS

And while you won't hear this poet's grandson sing about Glocks or women jiggling their backsides, he doesn't begrudge American rappers who dwell on such topics.

"I have a lot of friends who are from either side, Mos Def and those guys who are in the conscious lane. I know other friends who are in the make-money lane. But for me, I see myself as someone who can speak to both audiences," he said. "That to me is important, to never claim a position too smart for the listener. I think it's important to reach everybody."

K'naan wasn't always so diplomatic. Ironically enough, he credits an awkward moment before the United Nations with kicking off his career.

One of several artists invited to a 50th anniversary celebration for the U.N.'s refugee agency, K'naan stopped midway through his performance to read a poem blasting the body for its failed missions in Somalia.

The crowd's initial nervousness made him think his days as a musician were finished, but the audience stood and applauded. K'naan said he was relieved and proud to have taken a stand.

Senegalese singer Youssou N'Dour jumped on stage and gave him "a powerful hug." They would record together two years later.

"I just didn't feel like entertaining in that moment would have done my experiences justice," K'naan said. "I wanted to justify my existence for all the survivor guilt that I was carrying."

It's been a theme in his life, using music and words to express himself, to explore his thoughts and emotions -- and don't expect that to change, he said.

If he's not making listeners think -- about Africa, about poverty, about love or life or hatred -- well, he should hang up the mic and find another profession, he said.

"If I'm not filling a void, then I shouldn't be making music. This is what I think when I'm creating something."