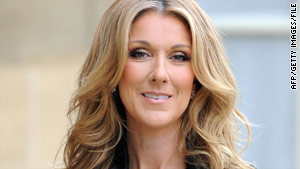 (CNN) -- Singer Celine Dion is 14 weeks pregnant with twins after years of trying to expand her family, her representative said Sunday.

Dion, 42, and her husband-manager Rene Angelil, 68, will find out next month the gender of their twins, representative Kim Jakwerth said.

The pregnancy was the result of her sixth in-vitro fertilization attempt, Jakwerth said. Dion turned to acupuncture therapy to improve her chances of getting pregnant, she said.

Angelil is the father, she said.

The couple already has a 9-year-old son, Rene-Charles.

The five-time Grammy winner has sold 200 million albums around the world, according to her website. A new Harris Poll released in May named Dion, a Canadian, as America's favorite singer.

Dion, who completed a world tour last year, will return to Las Vegas, Nevada, next March to begin a three-year residency at The Colosseum at Caesars Palace.