Men at Work must pay portion of royalties for plagiarizing song 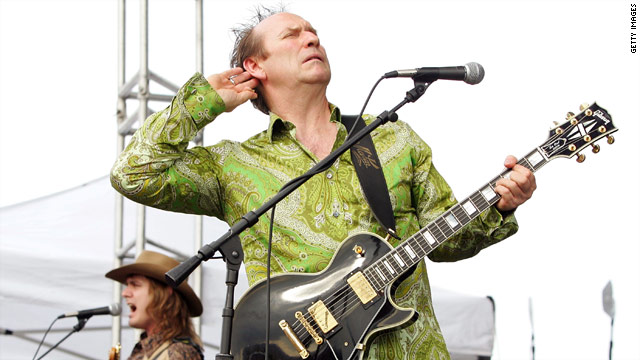 Can you hear the similarity? Former Men at Work frontman Colin Hay performing in Las Vegas in July 2006.
STORY HIGHLIGHTS

(CNN) -- An Australian judge ruled Tuesday that the band Men at Work must pay 5 percent of royalities from their 1980s hit "Down Under" for plagiarizing a popular nursery rhyme about a Kookaburra written in 1932.

In February, Federal Court judge Peter Jacobsen found that the flute riff in "Down Under" did mimic the Kookaburra song.

"I would emphasise that the findings I have made do not amount to a finding that the flute riff is a substantial part of Down Under or that it is the 'hook' of that song," he said at the time.

"Down Under" was composed and performed by Men at Work founding member Colin Hay in 1978. Greg Ham added the flute riff after he joined the band in mid-1979.

According to court documents, Ham added the riff to the song to inject some "Australian flavor." He admitted he had heard the song while growing up in the country in the late 1950s and was "pretty sure" that Kookaburra was in his school's song book.

The song was written in 1932 by teacher Marion Sinclair, and Australian music group Larrikin Publishing bought the copyright to it in 1990 after Sinclair's death in 1988.

It wasn't until a quiz show in 2007 that Larrikin Managing Director Norman Lurie became aware of the songs' similarities and the potential for a law suit.

Jacobsen found that Ham deliberately included the bars from Kookaburra into the flute line, but accepted that Colin Hay didn't realize it was from the nursery rhyme until early in the last decade.

Larrikin had sought 40 to 60 percent of the royalties earned by "Down Under" in Australia since May 20, 2002, the limit imposed under Australian law. The ruling says it would make sense for the ruling to apply to future royalty payments.

"I consider the figures put forward by Larrikin to be excessive, overreaching and unrealistic," Jacobsen said in Tuesday's ruling.

"It's just really a pity that Marion Sinclair, the lady who wrote it, didn't participate in income from the song when the song was at its height in the early 80s," Larrikin's lawyer Adam Simpson said in February.

At the time, Simpson said the company did not plan to sue overseas for royalties earned by the song outside Australia. "To be honest, such things are theoretically possible but we're keeping it simple," he said.

Experts say the amount of damages payable will be limited by the judge's finding that riff did not amount to the "hook" of the song.

"There's a lot more to 'Down Under' than that flute melody. It's not the main melody and not the main hook and I suppose that in the end will mean that it will be a minor share of the royalties that this publisher can claim now," said Daniel Mullensiefen, co-director of the masters program in Music, Mind and Brain at Goldsmiths University in London.

The shorter, more popular version of "Down Under" was released in 1981 in Australia on the band's hugely successful "Business as Usual" album.

By January 1983, the single had topped the music charts in Australia, the U.S., Britain, Canada and several European countries.