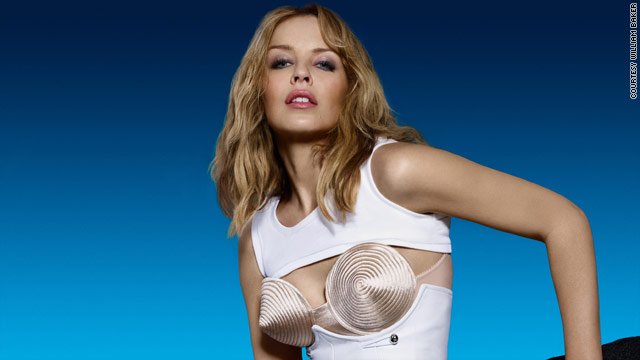 Kylie Minogue has survived breast cancer and has released a new album that marks more than 20 years in the music business.
STORY HIGHLIGHTS
RELATED TOPICS

New York (CNN) -- If the music video for her song "All the Lovers" is any indication, singer Kylie Minogue is having a pretty good time of late.

For the video's -- ahem -- climax, we see the pint-sized Australian perched atop a skyscraper-high, cone-shaped mass of writhing bodies, both the overseer and the adored instigator of the pleasure-packed scene below her.

It's a fitting image for Minogue, whose new album "Aphrodite" (out this week) marks more than 20 years in the music biz.

Let's not forget her biggest personal feat: winning her fight against breast cancer. (But is the fight really over? More on that below.)

While Minogue, 42, hasn't enjoyed the same level of success in the States as she has in the United Kingdom and her homeland, she recently crossed the pond from London (where she lives) to personally share the details on her latest dance-pop offering with CNN.

CNN: Why did you choose "All the Lovers" as the first single for the album?

Minogue: My record company and I, our management and friends, we debated and deliberated for a while over what the first single should be.

There are other songs on the album that are more instant singles, but we decided it was more important to come with a statement song. And I think "All the Lovers" gets under your skin. I love the sentiment, and it sets a tone for the album.

CNN: Who came up with the concept for the video?

Minogue: The lovely Mr. Joseph Kahn. It's the first time I've worked with him. (Kahn has directed music videos like Britney Spears' "Toxic," Katy Perry's "Waking up In Vegas" and Eminem's "Without Me.")

His treatment was really brief. It was referencing the artist Spencer Tunick. It was all on one single page with a photo, and at the end it said something like "universal love." That was the brief! And we know he's a marvelous director, so when I've got trust in someone, he doesn't need to write any more than that.

CNN: It didn't sound bizarre to you?

Minogue: No, it sounded beautiful. Videos don't always turn out the way you hope they will. But this I think turned out even better than I could have imagined.

CNN: Is making these videos as much fun for you as it appears?

Minogue: Ha! I do love it. I've got to say it takes me back to where I first found my spiritual home -- acting. But you always hurt for some reason: It's too hot, it's too cold, you're doing something that's awkward, you're in a harness, you're in water. There's always something. But then I have to say something that I read somewhere -- "Pain is fleeting, but video is forever." So suck it up and get on with it!

CNN: Can you believe that this is your 11th album?

Minogue: Not really. No. God. Yeah over 22 years. I guess they spread out pretty well. I got a good run-up the first five years with Stock, Aitken and Waterman where it was an album each year.

Minogue: Not very often. My dance floor is the lounge room after you've had a few drinks. That's the best place! Strangely I did recently, though. We had this listening party in London for a few industry people and journos. It was a big day for us to let people hear the fruits of our labor. Well, one thing led to another and there's a club right across the road. Next thing I know I was dancing on the [couch in the booth]. I'm like a meerkat. I've got to be on something up high. It's probably the stage person in me.

CNN: It's been about five years since you were diagnosed with breast cancer. As time goes on, do you find you gain a different perspective on the whole experience?

I don't know how I did it, really. I was determined I had to do it. And as time goes by sometimes it's not in my mind -- it floats into the cosmos. Then at other moments, physically and mentally there are heavy reminders of it.

CNN: Does having survived cancer ever make you feel fearless?

Minogue: Maybe. Sometimes. But on the other hand, knowing that life can in an instant take the sharpest turn ... that's still something we all live with all the time. But it would be unreasonable to be living with that shadow or those clouds over you, so I just try and get on with it really.

And in a way I've talked about the joyful, euphoric moments on the album. They relate to how I feel in life at the moment. Life is just made up of moments all joined together, so if you get one that's got some joy in it, try and acknowledge it, try and feel it. And pass it on if you can -- even better!

CNN: How do you feel physically?

Minogue: Alright. I still haven't reached my five-year clears. I still have treatment, so it's still a part of my everyday life.

CNN: You certainly don't look like someone at the tail end of treatment. That must be inspiring for a lot of people.

Minogue: Thank you. That is rewarding for me.

And I know in very real terms because I've had letters and I've had people come up in the street. And it could be something which is seemingly very simple, like "oh my mom was going through it, or my auntie. And they saw you with your really short hair and they decided they weren't going to wear their wig to work that day."

It doesn't sound like that much, but in that moment these things affect your entire psyche. To help someone in a little way is just an absolute privilege.

Minogue: I think I'm hard-working. I like to have a laugh. I like the human interaction. I'm a Gemini. We need the stimulation and I really thrive off that. If things start to get boring, you've lost me. I've traveled somewhere else! So work is better in short bursts. Like choreography -- don't put me down for a day of rehearsal because I just won't stay there. But I'd stay a whole day in the studio because I just prefer to be in there.

CNN: Are you someone who likes to have complete control over everything?

Minogue: Slightly (laughing). Slightly, though not totally. I don't think I can call myself a control freak, but if it's completely out of my hands then I fret.

CNN: What are your touring plans?

Minogue: For my sins I want to tour next year, and I'd like to go more or less everywhere I've been in the last three years. Touring is just the best. Although it's grueling, you get your reward every night or every couple of nights. It's right there in front of you. It's happening.