Turn out the lights, blow out the candelabra: Liberace Museum closing 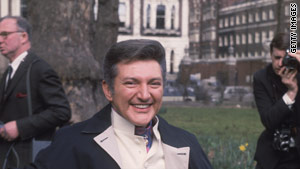 The Liberace Museum, which opened in 1979, will close its doors on October 17.

(CNN) -- Asking Liberace Museum director Tanya Combs to describe some of its popular exhibits is an invitation to sensory overload.

There's the outfit the late entertainer wore to Radio City Music Hall in New York. Decked in pink turkey feathers for that show, Liberace emerged from a giant Faberge-style egg to adulation.

Then there are the matching piano and Rolls Royce, each covered in mirrored tiles.

And the piano and car covered with crystal rhinestones?

Since 1979, fans of the larger-than-life pianist, who famously said, "I don't give concerts, I put on a show," have wandered a couple miles off the Las Vegas Strip in Nevada to see vestiges of the wonder that was Liberace.

But not enough came in recent years. The show ends October 17.

Dwindling attendance and a shaky economy led to Friday's announcement that the museum will close, officials said.

Sixteen full-time workers, including Combs, and seven part-timers will be out of a job, said Combs, who has worked at the museum since 2000.

Most of the items will go into storage until a day when, perhaps, another museum opens. The Liberace Foundation, which operates the museum, will put on a traveling exhibition of many of the items, probably late next year, said Combs.

"The traveling exhibit is an exciting way to share the life and legacy of Liberace while providing an income stream for the Foundation," Jeff Koep, chairman of the Liberace Foundation, said in a statement. "In no way do we intend to close the doors and not continue to explore options that will allow us to reopen at a later date."

Liberace, who died at age 67 in 1987, opened the museum on East Tropicana Avenue in 1979. Annual attendance once was about 450,000 and officials touted it as second to Hoover Dam for visitors who stepped out of Las Vegas.

But the numbers declined dramatically in recent years, with perhaps 35,000 patrons so far this year, Combs said, adding many visitors to the Strip didn't want to pay cab fare to get to the museum.

The museum is in a strip mall that has seen businesses depart, said Combs, who bristles at that those who claim the museum may have been overstaffed. She said the two-building venue required volunteers, too, because of its size and the fact that many of the exhibits are in the open air and needed to be watched.

She points to another factor.

"The tourists still support us," the Virginia native said. "I think we were not embraced by the locals here."

Where once the museum sustained itself, in recent years the foundation had to pour money into the museum, Combs said.

The non-profit foundation will continue its work of providing scholarships to the performing and creative arts. It has provided nearly $6 million in assistance to 2,700 students.

"It's a rags-to-riches story," said Combs.

The showman was on radio, television, stages around the world and performed for monarchy. A superb pianist, Liberace wore outrageous outfits -- including a white mink cape over a silver costume -- and had a signature candelabra perched on the piano.

He influenced many performers, including Elton John and Cher, and reinvented himself, said Combs.

As famous as he was in life, Liberace's legacy perhaps has faded a bit over the years. "People like singers," said Combs. "He was a fantastic pianist. He was a wonderful showman."

When he died, no one stepped in to promote his legacy and market merchandise, as they did when Elvis Presley died, Combs said.

"If you don't do that immediately, something is going to be lost."

The museum did try a marketing blitz, and the number of visitors have picked up the past few days.

Many still head for the museum gift shop, where they can purchase a Liberace watch replica, a candelabra ring or a piano ring.

Koep told the Las Vegas Sun that the attraction is closing "indefinitely, but not forever." Museum officials, led by foundation president Jack Rappaport, were in talks to move the attraction, but a deal was never struck, the Sun reported.

Performers put on shows in the glitter-filled museum's cabaret and several are planning a farewell show before October 17.

But there was only one Liberace, Combs said.

"You felt like he was performing for you," she said.