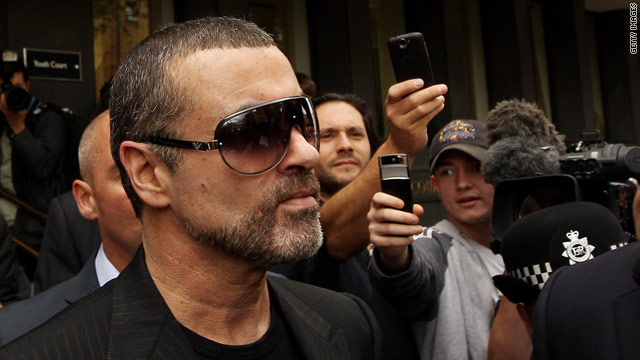 Police found George Michael slumped over the wheel after crashed his Range Rover into a shop in north London.
STORY HIGHLIGHTS

London, England (CNN) -- Pop singer George Michael was jailed Tuesday to serve an eight-week sentence after pleading guilty to a charge that he drove while under the influence of drugs.

The charge would normally carry a 12-week sentence, but District Judge John Perkins said he gave Michael credit for his guilty plea and his remorse. He said Michael must serve at least half the sentence.

The case relates to an incident in the early hours of July 4, when Michael crashed his car into the front of a north London shop, damaging the facade. No one was hurt in the accident.

Prosecutor Jonathan Efemini told the court Tuesday that when police got to the car, they found Michael wide-eyed and appearing "spaced out." He was also carrying two marijuana joints, Efemini said.

Michael told police he had left home at 1:30 a.m. to see a friend but couldn't remember the route. He said he had taken a sleeping pill that had been prescribed eight days earlier and admitted smoking cannabis earlier in the night, Efemini said.

About a dozen fans lined up to get a seat in court, but only five were allowed into the public gallery. Shelley Williams, 41, who was the first fan in, said, "I just wanted him to know that his fans out there support him."

Another London fan, Anne Fallon, 41, said, "It's really sad. I hope he can get the help he needs."

Michael, whose real name is Georgios Panayiotou, was sentenced for the formal charge of driving while unfit through drugs. His sentence includes a fine 1,250 pounds, or $1,925, and a five-year driving ban.

He already reimbursed the shop owner in person for the damage, Efemini said.

Despite showing leniency, the judge mentioned Michael's two previous drug arrests, saying, "It does not appear you took proper steps to deal with what is clearly an addiction to cannabis."

He was arrested again the following year near Hampstead Heath park in north London and cautioned for possession of a controlled substance.

Michael's defense attorney said his client had "profound shame and horror" at having committed another offense.

"He acknowledges and recognizes that his actions ... had the effect of causing other road users to be in danger," Mukul Chawla told the court, "and that stark fact caused him to be greatly ashamed."

Chawla said Michael even admitted that shame to officers when he was arrested, telling the police, "It's so ridiculously dangerous."

Michael has used prescribed medicine for many years, Chawla said, and earlier this year decided to stop taking them completely. Though it went well initially, Chawla said Michael eventually started having anxiety and insomnia, and reluctantly asked a doctor for sleeping pills to manage it.

The defense highlighted Michael's extensive charity work, much of which he keeps private. Chawla called the singer a "kind, considerate, loyal man, constantly concerned with the plight of others."

Chawla also revealed that Michael, a former member of the '80s group Wham!, has begun writing songs again for the first time in many years.

"His creativity, so long hidden by the [drugs], is reemerging," Chawla said.