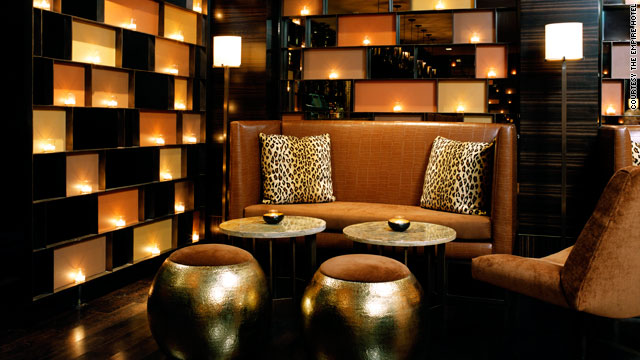 (CNN) -- Kate Ryan's fiancé will not let her live down the fact that she chose a hotel for their weekend getaway from Philadelphia, Pennsylvania, to New York based on the teenage drama "Gossip Girl."

Ryan, a 26-year-old public relations executive, watches the CW show regularly. Like many viewers this past season, she took notice when the show's resident bad boy, Chuck Bass, opted to invest in some New York real estate, the very real Empire Hotel on Manhattan's Upper West Side.

"We walked into the lobby and my fiancé was like, 'Oh, now I know why you wanted to stay here, even though this hotel is in a horrible neighborhood,' " Ryan recalled.

It is women in their 20s and early 30s, like Ryan, who have built a fan base for "Gossip Girl" and who are now driving traffic to the hotel across the street from Lincoln Center.

The marriage between property and television show began last summer when the production company called David Bowd, the president of hotels for Amsterdam Hospitality, which owns the Empire Hotel, and said it was looking for a hotel for location filming and also to include as a quasi-character on the show.

"They were looking at three major competitors of ours at the time," Bowd said. "They finally picked us and I thought it was a great match for the hotel because we already catered to a young, affluent crowd in New York City with our rooftop lounge."

The show started filming quietly in the hotel's rooms and lobby over the summer. The hotel made its TV debut at the start of the fall season when Chuck Bass began living and working out of the hotel.

Its bright red sign is featured prominently on the show.

"My phone never stopped ringing from folks in the industry asking 'Really?' " Bowd said. "But I thought it was a great idea. I watched as a woman around 17 years old came to stay at the hotel with her mother. She didn't realize that the show would be filming and she nearly hyperventilated right there in the lobby."

It is girls like that and women like Ryan who are driving traffic to the hotel these days. That is an invaluable asset as tourist traffic is up and business travel is down.

"I think that teenagers can dictate where their parents stay over vacation and we saw a lot of that over the Thanksgiving holiday and into the bookings for Christmas and New Year's," Bowd said.

Alanna Lopez manages the front desk and concierge service for the Empire and said there is no shortage of guest questions about the show during the room booking process.

"The standard questions we get are about how often the cast shoots and when they will be back. A lot of people call just wanting to know if they really shoot here in the hotel or whether they just use the name, and I have to tell them that yes, they really do shoot on location here," Lopez said.

On site, most of the questions Lopez and her staff are asked don't come from starstruck teenagers. They come from women Ryan's age.

"The questions here come from girls in their 20s and 30s. They want to know if Chuck Bass is really as cute as he is on the show and if the girls are actually skinny in person," Lopez said.

When the show's stars, Blake Lively, Leighton Meester and Ed Westwick, are at the hotel filming, it isn't unusual for crowds of around 400 people to gather outside the hotel's entrance on West 63rd Street.

The Empire's boom comes amid an overall decrease in occupancy for hotel rooms throughout the rest of New York. John A. Fox, a senior vice president with PKF, a consulting hotel advisory firm, reviews hotel numbers every day. He noticed an uptick in the Empire's numbers recently but had not thought to attribute it to the hotel's guest appearance in a television show.

Fox said the rest of New York's hotels are just starting to put the dark days behind them. Compared to the Empire's increased sales, occupancy for the city as a whole has been at 81 percent, down 5 points from 86 percent last year. Additionally, room rates have been down, decreasing by around $70 last year. The change, Fox said, comes from the replacement of business travelers to the city with the kind of tourists who are flocking to the Empire.

"You can compare it to what 'Sex & the City' did for the shoes [of] Manolo Blahnik," said branding expert Todd Brenard of The James Group. "It increases the awareness of the hotel to a national audience and people who are loyal viewers of the show will want to experience in their lives what they see the characters experiencing. Plus people who are new to New York will already feel like they know the hotel and that is comforting for out-of-town travelers."

The hotel's staff has been enjoying capitalizing on its newfound fame. They hired cocktail consultant Somer Perez to concoct a menu of "Gossip Girl"-themed cocktails for the property's rooftop bar and lounge, including the "I'm Chuck Bass," a mix of Dewar's Scotch and apple cider that the menu promises will start out sweet and turn sour, much like the character played by Westwick.