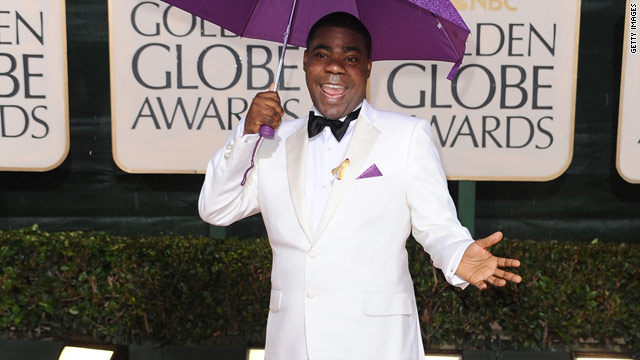 Tracy Morgan says that he enjoyed fame a little too much, and started to "hurt people that I love."
STORY HIGHLIGHTS
RELATED TOPICS

Los Angeles, California (CNN) -- Actor Tracy Morgan's riding high, but the actor-comedian said that -- thanks to his teenage son -- he's not driving high.

Morgan, arrested twice for drunken driving four years ago, said he sobered up after his son confronted him.

"My son said, 'What if I start driving drunk and kill somebody?' That right there just made me look into the mirror, like, I got to step up my game," Morgan said Tuesday on PBS' "Tavis Smiley."

Morgan, whose role on NBC's "30 Rock" earned him an Emmy nomination last year, stars with Bruce Willis in "Cop Out." The action-comedy film hits theaters this month.

It was the "worst drug known to mankind" -- fame -- that led Morgan down a path of "partying and hanging out" that only ended two years ago, he said.

"I started to even hurt people that I love," he said. "I was changing and I'm glad that I caught it in time." Morgan told CNN last October that it had been a year and a half since he had a drink.

"All the drinking and the craziness, I had fun," he told Smiley. "Nobody got hurt, but I hurt me."

The drunkenness brought an end to his marriage of 21 years, he said.

But it was the conversation with his son, now 18, that opened his eyes, he said. It happened in 2007 when Morgan was wearing a bracelet to detect alcohol vapors. A Los Angeles judge had ordered him to wear it for six months because of his drunken driving arrests.

"I'm walking around with a bracelet on my ankle and my son looking at me like I'm Kunta Kinte, like, 'What you doing Dad? What if I start driving and drinking? Would that be cool?' And that was it for me. That was the end of it," Morgan told Smiley.

Morgan said his father, who died of AIDS when Morgan was just 17, taught him the key to survival was to learn from your mistakes.

"Rock bottom for some people is death," Morgan said. "Some people never learn from their mistakes. They don't learn from other people's mistakes."

Morgan was a regular cast member on NBC's "Saturday Night Live" for seven years before getting his own series -- "The Tracy Morgan Show" -- which was canceled after one season.

His "30 Rock" role earned him an Emmy nomination for best supporting actor in a comedy last year.

He also published an autobiography last year titled "I Am the New Black."