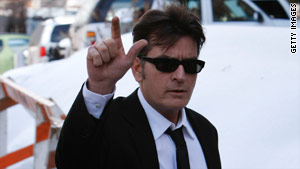 Sheen will "take some time off" from his acting job on the CBS series "Two and a Half Men" while he undergoes rehabilitation, publicist Stan Rosenfield said.

In a joint statement, executives from CBS and Warner Bros. Television and "Two and a Half Men" creator/producer Chuck Lorre said they "support Charlie Sheen in his decision today to begin voluntary in-patient care at a treatment center. We wish him nothing but the best as he deals with this personal matter. Production on 'Two and a Half Men' will be temporarily suspended."

Rosenfield's short statement did not say what issue Sheen needed to address with rehabilitation or the kind of facility he is entering.

The announcement comes a day after a lawyer for Sheen's wife, Brooke Mueller, confirmed she had switched rehab facilities in her battle with substance abuse.

There was no information given about who was caring for the couple's twin boys.

Sheen, 44, and Mueller, 32, were involved in an alleged domestic dispute in Aspen, Colorado, on Christmas Day that resulted in a felony assault charge against Sheen.

Mueller's lawyer said Monday that she pulled out of The Canyon, a Malibu, California, rehab center, over the weekend after a "major breach of her privacy."

She immediately checked into "a private, secure facility" to continue her substance-abuse rehabilitation so she can be "the best mother" to her children, attorney Yale Galanter said.

Galanter said he was planning a lawsuit against the rehab center after confidential details of Mueller's treatment there were given to journalists over the weekend.

"I am going to make them pay like you can't believe for screwing over my client," Galanter said. "You can quote me on that."

A call to The Canyon by CNN was not immediately returned.

Mueller voluntarily entered rehab in the wake of the Christmas Day incident with Sheen, Galanter said.

Sheen and Mueller married in 2008. Their twin sons -- Max and Bob -- will have their first birthday in March.

"The visit from [the department of children and family services] was routine and procedural," Rosenfield said.

Los Angeles County was asked by Pitkin County, Colorado, child protection officials to check on the family as part of a follow-up to Sheen's arrest in Aspen, Rosenfield said.

CBS did not immediately respond to CNN calls for comment.

Sheen's history of trouble began in 1990 when he was dating actress Kelly Preston. Reports surfaced then that Preston had been shot in the arm. In 2001 Sheen told Playboy magazine that it was a "complete accident. I wasn't even in the room. She picked up a pair of my pants. ... A little revolver fell out of my back pocket, hit the bathroom floor and went off. It shot a hole through the toilet and she got hit in the leg with shrapnel."

In 1996, adult film actress Brittany Ashland accused Sheen of throwing her on the floor and splitting her lip. Sheen pleaded no contest to battery charges and was fined $2,800. He entered rehab in 1998 after an alleged drug overdose.

During the course of his divorce from model-turned-actress Denise Richards in 2006, Richards filed a restraining order against Sheen, saying he tried to kill her.