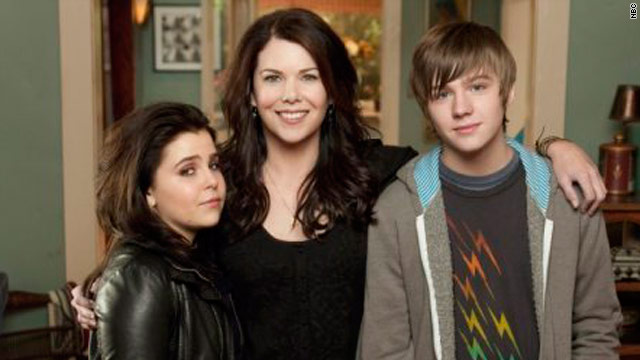 Lauren Graham (center) is one of the stars of the new series "Parenthood."
STORY HIGHLIGHTS
RELATED TOPICS

(CNN) -- Twenty years ago, NBC turned the box office hit "Parenthood" into a half-hour sitcom. It was critically acclaimed but struggled to find an audience and was cancelled after just 12 episodes.

The network has now retooled "Parenthood" into a one-hour drama that it calls "re-imagined and updated." It premieres Tuesday night.

The focus is still on the lives of an extended family, and the taglines say it all: "Parenthood is the one bond you can never break." "It's being the bad guy one minute and the hero the next." "Parenthood is saying exactly the right thing at exactly the wrong time."

The characters have been renamed but are all based on the ones portrayed in the original movie (e.g., Adam Braverman is played by Peter Krause, whose character is based on Gil Buckman, who was played by Steve Martin in the film and Ed Begley Jr. in the sitcom). And the focus remains on the extended family members' relationships with one another.

The new show opens upon a financially strapped Sarah Braverman (Lauren Graham), who moves her troubled teenaged son and daughter in order to be closer to her family. Graham stated in an interview that "just because it's about people and their problems, it's not gonna be a sad, sad bummer. It's gonna be hilarious."

Ron Howard, who directed the original film, serves as executive producer. Howard calls "Parenthood" his most personal film, as the concept was inspired by an incident in which his daughter Bryce Dallas Howard -- now a movie star, then a toddler -- vomited on a 17-hour flight.

The focus on the clan serves as a springboard by which to introduce the audience to the colorful interpersonal relationships between siblings, spouses, cousins, in-laws, grandparents and grandkids -- and, of course, parents and their children.

So why not invent a whole new family and tell their story? Well, save a few outdated references, the original film holds up surprisingly well and should translate to 2010 without a hitch.

In one scene from the movie, the character of Helen mistakenly picks up the wrong batch of photos, only to find embarrassing pictures of her teenage daughter and her boyfriend. Today she might stumble upon her daughter's Facebook account or drop the wrong SD card into her digital camera, but the impact is the same.

In the new show, the family patriarch is portrayed by Craig T. Nelson and is named Zeek. According to his son Adam (Krause), he raised his kids to feel like "everything in life is a war."

Also notable is Adam's son, Max. Max has Asperger's syndrome, a form of autism. The little boy in the movie, however, was an extremely tense child who worried a lot. His teachers wanted to put him in special ed (which horrified his parents), and he was in therapy, but his condition was never explicitly stated.

Another memorable scene from the film beautifully sums up "Parenthood" in all its incarnations. Jason Robards' character, Frank Buckman, debates whether to pay off his youngest son's gambling debts. He talks about how he didn't expect fatherhood to include so much worrying and caring.