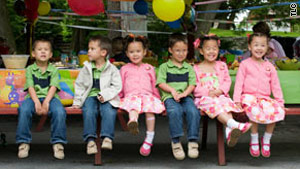 (CNN) -- "Jon & Kate Plus 8" violated Pennsylvania's child labor law by not getting work permits for the Gosselins' eight children, but state officials said they will not file charges against the reality TV show as long as it doesn't happen again.

An investigation launched last year found no evidence that the children were mistreated but it concluded that their participation required work permits, according to a resolution agreement from the state's Bureau of Labor Law Compliance.

The talent agency representing the family signed the agreement with the state last month.

The TLC show was canceled after five seasons in the wake of the separation and divorce of Jon and Kate Gosselin last year.

The Gosselins and show producers have insisted that the children -- a set of 9-year-old twins and 5-year-old sextuplets -- did not need permits.

The state said their participation added up to work.

"The activity being filmed was spontaneous," it said. "However, children introduced episodes of the television show and transitions. DVDs and other merchandise were sold involving the children's appearance. Lighting was placed in the home for the show and there was product placement in some episodes."

If Kate Gosselin wants her kids to be in her new TLC show, "A Twist of Kate," she must get state work permits. Otherwise, the state could re-open the case and file charges for past offenses, the letter said.

At least 15 percent of the money paid to the children must be put into an irrevocable trust account that can be spent only when the children turn 18, the state said.

Although Jon and Kate Gosselin reached a child custody agreement last year when they were divorced, he recently filed for a new court order. Jon Gosselin's filing contends that his ex-wife is placing her career efforts ahead of the children and that she is unfairly denying him time with them.

Kate Gosselin just survived another week as a "Dancing with the Stars" contestant, despite consistently low scores from the judges.