Gosselin kids get permits to work on mom's new show 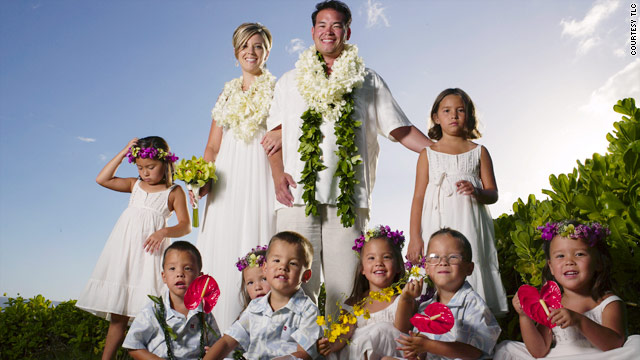 The Gosselin children, shown here in happier times with their parents, will be featured in their mom's new reality show.
STORY HIGHLIGHTS
RELATED TOPICS

(CNN) -- Kate Gosselin's eight children are cleared to work on their mom's newest reality TV show, "Kate Plus 8," according to a spokesman for the Pennsylvania Department of Labor and Industry.

"Each child is individually permitted, and they need to be renewed every six months," said spokesman Troy Thompson.

Pennsylvania labor officials recently decided that while the Gosselins violated the state's child labor law by not getting work permits for the kids for their original show -- "Jon & Kate Plus 8" -- no charges would be filed as long as they had permits for future shows.

An agreement signed by Kate Gosselin's talent agency with state labor officials said she must get work permits for the children for any future TV work. Otherwise, the state could reopen the case and file charges for past offenses, according to the state letter released earlier this month.

The Gosselins and show producers have said the children -- 9-year-old twins and 5-year-old sextuplets -- did not need permits. The state said their participation in the show was work.

At least 15 percent of the money paid to the children must be put into an irrevocable trust account that can only be spent when the children turn 18, the state said.

The state's Bureau of Labor Law Compliance concluded the kids were not mistreated during the taping of "Jon & Kate Plus 8."

Still, Kate Gosselin's brother and his wife told Pennsylvania lawmakers at a hearing this month that they were worried about how the children were treated.

"We saw many concerning safety issues and did not see any safeguards in place to protect these children's rights," Gosselin's sister-in-law Jodi Krieder said.

Kevin Krieder testified that the Gosselins faked Christmas, waking their kids up one day telling them Santa had come.

"It was so the camera crew could get the genuine reaction of the children." Krieder said. "It wasn't until after that they were told that it was not Christmas morning."

"Can you imagine how confused eight little kids were that morning?" he asked.

Kate Gosselin, in an interview on HLN's "The Joy Behar Show," dismissed the charges as an example of her relatives trying to make money on her celebrity.

"My brother has made a lot of money off of saying a lot of things that are untrue about us," she said. "I've not allowed them to see my kids for two years. So, I'm not quite sure what information they think that they might have."

Although Jon and Kate Gosselin reached a child custody agreement last year when they divorced, he recently filed for a new court order. Jon Gosselin's filing contends that his ex-wife is placing her career efforts ahead of the children and that she is unfairly denying him time with them.

She defended her busy show business schedule, which includes "Dancing with the Stars," her book tour and preparations for a new show on TLC.

"I'm a working mom, I'm single and I have to provide for my kids," she said. "No pun intended, but the show must go on."