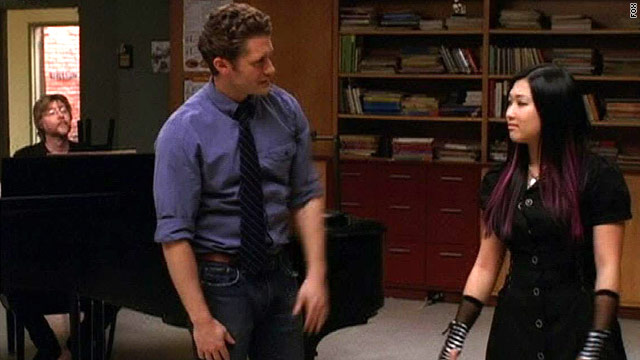 Brad Ellis, seated at the piano, has appeared on "Glee" since the first episode.
STORY HIGHLIGHTS
RELATED TOPICS

(CNN) -- There is an actor on "Glee" whom fans see every week, even if they may not notice him right away.

"The mystery actually seems to do me well," said Ellis, who often pops up in shots as the pianist accompanying the now popular fictitious McKinley High show choir. "It is possible that it's one of those Oscar Wilde-type situations where it's better to shut up and have people think you are a fool rather than open your mouth and confirm it."

The accomplished musician, vocal coach and self-professed "gleek" was a natural for the show's musical production team, having made his name in New York City as part of the Broadway and jazz scenes.

Now, he is so famous that he has multiple Facebook groups devoted to him and his character, who is also named -- wait for it -- Brad.

Ellis recently spoke with CNN about the joys of working with actress Jane Lynch, what artist he would like to see receive a "Glee" theme night and whether viewers will ever get to hear him speak.

Brad Ellis: We have a great casting director named Robert Ulrich, who is wonderful at what he does, but he's not specifically a musician. I'd worked with him before when he was casting a show that was all Elton John music that Shaun Cassidy was creating, so [Ulrich] thought of me for this.

Ryan Murphy, the creator of the show, he and I hit it off early on, and we worked side by side while working with some of the earlier actors he was exploring for the show and wanted to present to the network. I worked with them musically, and he worked with them from the acting perspective.

At one point Ryan said, "You should start getting used to wearing black." Here's a guy who is kind of a fashion establisher, so I thought, "Well, he knows what he's talking about, I better start wearing black."

His producing partner said, "No, Brad, you don't have to wear black here, it's when you are on the show. Then I was really confused.

CNN: So you had no idea you were going to end up on camera?

Ellis: No. That wasn't part of the original plan.

But the way I thought of it was that I had worked with these kids for a couple of months, they felt comfortable around me and I thought [Murphy] wanted me on set because I'm generally a very supportive person.

The first thing he told me about my character is, "Here's the thing. You hate them all."

CNN: That certainly explains some of your facial expressions on the show. Are you currently coaching any of the actors on the show?

Ellis: Not at this point.

Early on, I worked extensively with Cory [Monteith, who plays student Finn Hudson on the show], starting from before they approved him for the show. He sent in an audition tape where he did lines and he did some drumming. It was really charming, but you got to the end of the tape and you realized that he hadn't done any singing.

The truth was he hadn't done a lot of singing and the question was would [the singing the show required] be something he would be able to grow into. I could tell after the second or third time working with him that he was going to be able to do this and anything else he put his mind to.

CNN: There are so many actors on the show who have appeared on Broadway, it must feel like old home week going to work.

Ellis: It's funny you should say that because when I first met Ryan [Murphy, the show's creator], I thought, "Oh, he is pure theater." It just so happens that there are cameras in the room, but he is all about telling a story.

It's like I'm on the lot at Paramount, I'm not moving and they are bringing to me some of my best friends.

For a while, Kristin [Chenoweth, who has guest-starred on the show as "April Rhoades,"] had a concert cabaret act and I was her music director. My band, the Brad Ellis Little Big Band, was her band, and we got to be very close.

CNN: Do people recognize you on the street, do you get fans coming up to you?

Ellis: I seem to have three classes of fans because I am what I call a "sub-lebrity," which is a little below the basement of celebrity.

So the three levels [of fans] are singers and tweeners and bears, oh my. The show has so many rabid fans who apparently have really good eyesight, so they go "Oh, hey, that's that guy."

CNN: What's the funniest thing that has happened on set?

Ellis: I think that perhaps the most gifted, funny person on the planet right now might be Jane Lynch, who plays Sue Sylvester. She's always kind of taking us to school in that if there is ever any excuse to watch her in a scene, the whole cast of kids will hang around to watch her.

There was never much reason for Jane Lynch and I to be in the same scene at the same time until the episode where Sue divides the kids up into groups of minorities and nonminorities.

I was running through a song with Mathew Morrison [who plays teacher Will Schuester], and Jane looked at me kind of funny. She said "Hmm. I always thought you were an actor pretending to play the piano."

I said "No, I guess I'm a piano player pretending to be an actor."

CNN: Any plans to do any more acting?

Ellis: I've been getting calls to do things like that, and I always start with the caveat that I can play absolutely any character as long as they are exactly like me.

I've been doing some MCing for live events, and I've gotten a call for something Disney-related.

Ellis: Billy Joel. I worked with him a few years ago, and I read it in print that he has said he wouldn't mind the show doing his music, and I would love that.

But the only person who really gets a vote on that is Ryan Murphy.

CNN: And you know we have to ask the ultimate question: Will you ever get to speak lines on the show?

Ellis: (Laughing) Whatever works for the show is all right with me.