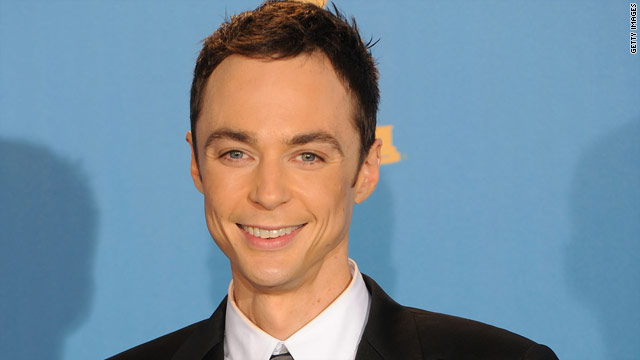 (CNN) -- It is official: Jim Parsons is the new poster child for geekdom.

The actor, who recently won his first Emmy for outstanding lead actor in a comedy series for his portrayal of Sheldon Cooper on the hit television show "The Big Bang Theory," is the hotness right now.

Not only has the media come calling from far and wide (a recent story in the Toronto Star newspaper referred to him as "Canada's favorite geek"), but Parsons is also a big hit on the Web as a trending topic on Twitter and a devoted fan base who spread their adoration via Facebook and fan sites.

"Every time we run a story on him, our hits go way up, and so does the amount of chatter," said Clifford Pugh, editor-in-chief of CultureMap.com, a site based in Parson's hometown of Houston, Texas. "He's up there with Beyonce and Lady Gaga."

Parsons is considered by many to be an integral part of the sleeper success that has been "The Big Bang Theory." The sitcom about two brilliant physicists and their group of friends started out slowly building buzz when it debuted on CBS in 2007.

Since then, the show has grown into a rating success for the network, even raking in fans abroad with its international distribution. In May, The New York Times reported that Warner Bros., which produces and distributes the show and is owned by CNN's parent company, had entered into "what is believed to be one of the most lucrative TV syndication deals ever" with TBS and local Fox stations.

Audiences just can't seem to get enough of the character of Sheldon Cooper, who is as socially dysfunctional as he is bright.

Admirers take to Facebook fan pages to post their favorite Sheldon quotes, including: ''Ah gravity -- thou art a heartless bitch" and "They were threatened by my intelligence and too stupid to know that's why they hated me."

Fans can visit Jim Parsons Online, and there is even a site, SheldonShirts.com, dedicated to the many shirts worn by the character, complete with links to where to buy the apparel. Mary Waring created the site because of her husband's interest in Sheldon Cooper's shirts and said it makes sense that Parsons would be a hit on the Internet given that the Web is a geek haven.

"I think people really enjoy him as an extreme example of the people they know," Waring said. "Those people who are in extremely intellectually stimulating fields who may not be very socially adept."

"Geeks are the new black," said Daniel Malen, editor-in-chief and owner of TheTVAddict.com. "Thanks to companies like Apple, digg and the internet in general, being a geek doesn't nearly have the stigma it once did."

CultureMap.com's Pugh said his hometown has taken great pride in Parson's success. The actor graduated from the University of Houston and was one of the founding member's of the now-defunct Houston theater group Infernal Bridegroom Productions.

"When Jim was here in the spring as the featured guest at a fundraiser for a Houston theater company he was with in the '90s, he credited the writers of the show for his success," Pugh said. "But his comic timing is incredible. I think he's the best pure comic since Lucille Ball."

And with his character's nerdy disposition and addiction to all things "Star Trek," Parsons is also a hit with the fan boys and fan girls. He and the cast are popular guests at Comic-Con International, the annual convention held in San Diego, California, and considered the premier geekdom gathering.

"From my readers specifically, [Parsons] is the show," Malen said. "Jim Parsons is to 'The Big Bang Theory' what Hugh Laurie is to 'House.' You watch it to tune in and see what he's going to do."

There is at least one trait that the actor doesn't share with his character.

Unlike Dr. Sheldon Cooper, who has been known to tweet what he eats for breakfast at 8 and that he moves his bowels at 8:20, Parsons doesn't seem to love Twitter as much as the fans who made him an international trending topic after he won an Emmy.

The actor told the site Zap2It in May that he just wasn't much into tweets.