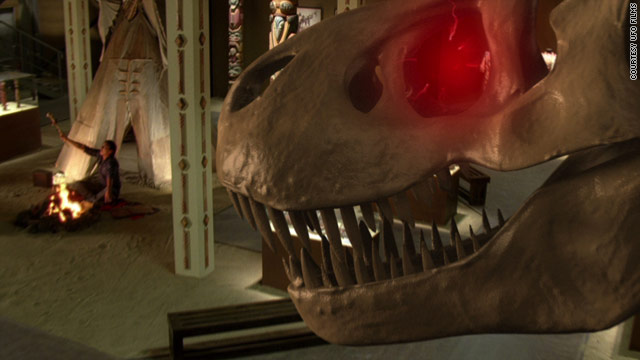 Spoiler alert: If you don't want to know anything about the plot of "Triassic Attack," "Sharktopus," or "Red," read no further. But you'd be missing out on some geektastic fun.

(CNN) -- The Syfy Channel is known for a certain kind of escapist fun.

Saturday nights are reserved for their original movies: movies that are lower-budget than the fare seen in theaters, but still meet science fiction fans' need for fantastic monsters, time travel and magic.

"Within the bandwith of the campy sci-fi movie, you can go from completely self-aware, with something like [classic sci-fi movie] 'Attack of the Killer Tomatoes,' and then in the middle you have something like [the Syfy movie] 'Sharktopus,' where the creature is just way over the top, sort of on purpose," Ferguson said.

"And on the other end you have sort of the more realistic version of the campy creature, like 'Triassic Attack,'" he added.

The movie is about the fossilized remains of dinosaurs that are brought back to life by a Native American spell and urged to wreak havoc on a small town. The ravenous, animated skeletons start eating as many people as they can.

However, because the resurrected dinosaurs are only bones, they have no digestive organs. So their human meals just drop to the ground after mastication.

"I'd describe it as, 'What happens when a flying tyrannosaurus rex attacks Oregon?' " said Ferguson. "Pandemonium ensues, no doubt!"

The movie's tagline reads, "They're ancient, they're angry and they're out for revenge."

Based on that description, Frank Conniff, "Mystery Science Theater 3000" writer and current member of "Cinematic Titanic" said it could be a perfect addition to his movie riffing routine.

"I guess the central dilemma of the movie is the digestive system of these monsters. ... Is Rolaids or Tums doing a sponsor?" he said. "Who could not watch a movie with that description?"

Conniff has made a living out of lovingly poking fun at campy, B-grade movies. He said the reason so many people love campy films is because of their originality and filmmakers' resourcefulness.

"The best of them have a real personality that comes through that you don't necessarily see in a big-budget movie," Conniff said.

Big-budget science fiction movies tend to rely more on a constant barrage of noise and shiny objects instead of the charm of a campy filmmaker, like Ed Wood, he said.

"We make fun movies with a lot of visual effects and a lot of action, and there's this huge fan base for them," he said.

"Anytime I'm out and about and people ask me what I do, I say, 'Oh I make the movies for the Syfy Channel,' and people are like, 'Oh! I love those things!' Anyone from a hairdresser to a guy in a grocery store, guy parking the car. I think it's really a wide spectrum of viewers for these movies, and I think the age range also varies very much, too."

"Syfy Channel is filling a void," Ferguson said. "People used to go to drive-ins to see these kinds of movies." There's something about cheap entertainment that makes people smile, he said.

Thomas Vitale, the executive vice president of programming and original movies at Syfy, said the movie "Sharktopus" made everyone on his team smile. Even saying the word "Sharktopus" was fun, he said.

Another recent Syfy movie, "Red," starring sci-fi fan favorite Felicia Day, applies that logic to the fairy tale "Little Red Riding Hood." Vitale said it was an easy leap to go from "a story that's about a little girl and a talking wolf," to an original movie that was about how a modern girl would deal with the sci-fi version of a talking wolf -- a werewolf.

With such attention to detail and adherence to a fantastic story line, Vitale said it's no surprise that Syfy's original movie team is made up of sci-fi geeks.

"Everything at Syfy Channel is run by robots, actually," said Karen O'Hara, vice president of original movies at Syfy.

"We're all fans of the genre, we all consume a lot of science fiction, fantasy and supernatural programming," Vitale said. "First and foremost, we are entertainment junkies. When I was a kid, the one thing my parents were always on me about was to turn off the TV."

And while it's clear the creative team at Syfy knows what traditional sci-fi fans want in terms of continuity and premise, Ferguson said he believes the network is reaching out to a more mainstream audience.

"With the creation of [original Syfy series] 'Eureka' and 'Warehouse 13,' it was like, 'no space, no aliens,' sort of grander science-type stuff. At the same time you had the mainstream [audience] getting more technical, more savvy, more sort of geeky," Ferguson said.

"Everyone is talking about iPhones and iPads and knows about e-mailing this and YouTube and Netflixing directly," he added. "It's all very sci-fi anyway in our world. So I think modern culture and technology sort of moved towards sci-fi, and Syfy tried to meet them half-way."

For now, thankfully, man-eating dinosaur skeletons are still squarely in the realm of outlandish camp.