For 25 years, it has been good to be King Spoken in the whiskey and gravel baritone of a man who smoked three packs a day for decades, the words have come to promise a nightly fix of current events and celebrity confessionals.

Led by friend and protégé Ryan Seacrest, a star-studded collection of guests will pay tribute. King will say his goodbyes. And then the set, with its familiar backdrop of multicolored dots, will fade to black.

When CNN offered him a one-year contract extension rather than the customary three to five years, King knew. "The writing was on the wall. I said, 'I think I'll get off the road here.' " He agreed not to jump to CNN's competitors if he could do four specials a year.

"I have no complaints against CNN," he said. "It's been a hell of a marriage. This is not a divorce."

Looking back at 'Larry King Live'

Quiz: How well do you know Larry King?

The other numbers in King's life are also impressive and, well, numerous: fifty-three years in broadcasting, 50,000 interviews, 6,120 shows in CNN's archives, a quintuple bypass, 10 Cable ACE Awards, an Emmy, a Peabody and an entry in the Guinness World Records.

King is an old-fashioned romantic who didn't just sleep with his girlfriends. He married them, proposing to one love interest on their first date. He has been married twice to a former Playboy bunny named Adele.

In his book, "Larry King: My Remarkable Journey," he agreed it wasn't "healthy" to be married more than two or three times.

When marriage No. 8, to Shawn Southwick King, hit a rough patch this year, divorce papers were filed but quickly withdrawn. She is the only spouse to "make it to two digits" with him, King has said. He isn't fudging when he says he wants to spend more time with his family.

But, as he'd probably be the first to tell you, the 77-year-old King is most at home behind a microphone.

He sat down in his office with CNN.com on Tuesday before interviewing Wynonna and Naomi Judd. He prowled and paced as he talked and autographed photos, copies of his book and the occasional pair of suspenders. The view out the window: the Hollywood sign.

He showed off a congratulatory letter from former Vice President Dick Cheney, a fellow member of "the zipper club," as King calls himself and other survivors of open-heart surgery.

The chat was going well enough when, ever the showman, King decided to jazz things up. He picked up the phone and dialed Wendy Walker, his executive producer of 17 years. She had urged him to do the interview.

"Wendy!" King growled into her voice mail. "What are you doing to me? Who is this woman? She's a mess. She's a wreck, drunk and falling down all over the place, slurs in her speech. The woman doesn't know where she is."

He hung up. Spotting a horrified expression, he teased, "Kid, your problem is, you don't have a sense of humor. Wendy's the same way."

Read excerpt from Wendy Walker's book on her years with Larry

A writer with a pad and pen brings no spark or spontaneity into Larry King's world. The point was driven home when a reporter from Los Angeles radio station KNX walked in and set up his mike.

It was as if someone flipped a switch in King's brain. He was "on," telling the stories, doing the voice.

These days, King said, he sees many other cable hosts going over the top. As he leaves his show, King is troubled by all the shock and awe, noise and "look-at-me" personality.

"On many of these shows, the guest is a prop for the host, and that's not my kind of broadcasting," he said. "I hope it's cyclical. I hope it comes back to information rather than yelling, and the guests are given a chance to finish a thought."

"I see more famous people here in a week than most people see in a lifetime."
--Greg Christensen, "Larry King Live" supervising producer

Since King announced his exit from the nightly show, celebrities have lined up for the last interviews: showbiz biggies such as Al Pacino and Barbra Streisand; political luminaries such as Bill Clinton, Colin Powell and Joe Biden; and heads of state, notably Russian Prime Minister Vladimir Putin, who told him, "Long live the King. When will there be another man who is as popular in the whole world as you happen to be?"

"It's been like last call around here for weeks," observed supervising producer Greg Christensen. "I see more famous people here in a week than most people see in a lifetime."

Seacrest said he's honored to be hosting Thursday's Larrypalooza, which he called "a historic television event."

He added, "Through his show, he has taught me so much about people and our world. I am proud to be friends with the man who has set the gold standard in the broadcast business."

Naomi Judd also considers King a friend. She and her daughter, Wynonna, were Tuesday night's live guests. But the show's energy was weird. 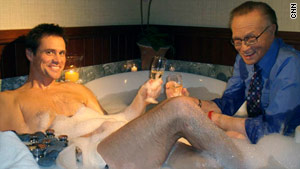 Larry King meets with actor Jim Carrey in a bathtub.

Judd said after the show, "I know the Larry King the world knows and I also know the real Larry King." Dropping her voice to a whisper, she confided, "The truth about Larry is, he's very insecure. He can be very abrupt and yet during the breaks he's the biggest softie."

It will be impossible to silence King's famous voice, of course, even if he is not yet certain where it will take him next.

A restaurant, perhaps? A stake in the Los Angeles Dodgers? Anything's possible. For now, he's only looking ahead to Monday, when he has agreed to appear as a guest on "The Tonight Show." After that, it's off to Utah to spend the holidays with his wife and their two boys, ages 10 and 11.

"I can't wait to see what he's going to do next. I don't think he's going away," said Ross Perot, an industrialist and former presidential candidate who debated NAFTA with Al Gore on one of King's most highly rated shows.

Perot said he always enjoyed appearing on "Larry King Live." "He did not interrupt you," Perot said. "You could have a really good conversation that millions of people could listen to and draw their own conclusions, as opposed to him telling you what to think."

Over the years, critics have accused King of tossing softball questions. He said he doesn't see it that way.

"I'm a minimalist, and the greatest minimalist question of all is, 'Why?' '' King said. "I never bought that softball rap."

The late actor Robert Mitchum was his worst interview, he said. "I'm asking, 'Who, what, where, when and why?' and he's saying, 'Yep, nope, maybe, yep and nope.' " 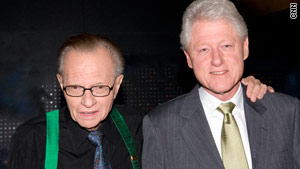 In King's opinion, Bill Clinton was one of his best interviews.

Frank Sinatra, Bill Clinton and Mario Cuomo gave the best interviews, in King's opinion, because they "had passion, the ability to explain what they do, a sense of humor and a little bit of anger."

O.J. Simpson's murder trial was a great story, King said, because it tapped into the zeitgeist of its time. "When the head of the Soviet Union lands on the tarmac and whispers to Clinton, 'Did he do it?' you've got a story," he said. "O.J. was the most famous person to be charged with murder since Aaron Burr."

He was not as enthusiastic about the Scott Peterson murder case, although Walker, his executive producer was and the story was great for the ratings. And he is dismissive of the Natalee Holloway case, which he calls "the Aruba story."

The last few weeks have been an emotional roller coaster for King. "It's episodic. It's like watching your mother-in-law go over a cliff in your new Cadillac," he said, echoing the comic tradition of the borscht belt.

He's nervous about the final show because he won't be in control: "I don't like surprises, and I don't like being the center of attention."

But he's warming up to the idea that it will be great fun to do whatever he wants without getting permission from network executives.

And, although he's had a quintuple bypass, he's not worried about getting health insurance. King said he's covered by the Screen Actors Guild because of his 22 movie appearances, 21 of them playing himself.

As for the future, King said he's open to anything because at 77 his life continues to surprise him.

He was born Larry Zeiger in Brooklyn in November 1933. His father died when he was a boy, and he and a brother grew up poor, "on relief" as they called welfare in those days.

The city of New York bought King his first pair of eyeglasses. They were wire frames, and at the time wearing them told the world he was poor. To this day, King won't wear wire-frame glasses.

He was a die-hard Brooklyn Dodgers fan, and he loved to sit in the cheap seats, keep score and announce the game.

He decided he wanted to go into radio, and somebody told him to head to Miami, where there were plenty of opportunities. He started at WAHR on May 1, 1957.

His boss told him the name Larry Zeiger was "too ethnic." He found inspiration in the pages of The Miami Herald, lying on his boss' desk. It was open to a full-page ad for King's Wholesale Liquors.

A name was born.

The comic legend Jackie Gleason, best known for his role as bus driver Ralph Kramden on "The Honeymooners," was an early mentor. Gleason called in a favor one day, and Sinatra appeared on King's radio show. He was off and running.

He went national on the radio, and then CNN founder Ted Turner came calling. King's starting CNN salary was $200,000. The only thing he'd say about his current paycheck is "CNN is treating me well."

The Los Angeles Times reported several years ago that King bought his house in Beverly Hills for $12 million. That was before the housing slump, but King said he isn't going anywhere.

"I love that house," he said. Besides, he told his sons, "Who else would take us in?"

"I still can't believe this whole thing happened to me," King said of his longevity and his success. "I'm still a little kid in Brooklyn broadcasting the Dodger game to myself."

He is pragmatic about his career: "It ain't brain surgery."

King usually is driven to the office, arriving around 4 p.m. for a quick briefing and a trip to the makeup chair. He's on the set by 6 -- 9 p.m. on the East Coast.

He's out the door as soon as the camera's red light shuts off.

After Thursday night's show, there's no telling when he will return.

"Six o'clock tonight will go on to 7 o'clock, with or without me," he said. "Some news will break, and I won't be there to cover it. I'm going to miss it."

But there are the four specials. He might not be right back, but as Larry King would say, "Don't go away."