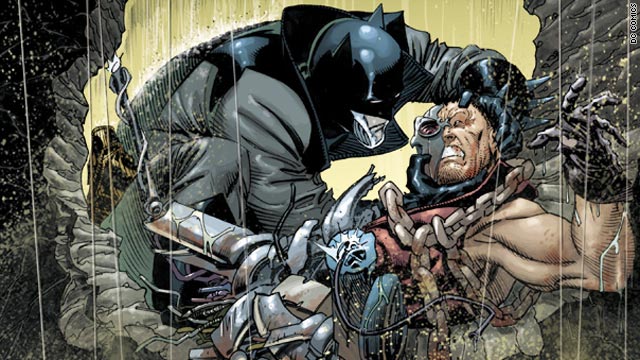 Stories of the past, present and future Batman are told in the 700th issue of "Batman," in stores Wednesday.
STORY HIGHLIGHTS
RELATED TOPICS

(CNN) -- As everyone but the citizens of Gotham City knows, Batman is Bruce Wayne. But lately, he's been Dick Grayson. And this month, he's also Damian Wayne and Terry McGinnis. Will the real Batman please stand up?

This look at Batman's past, present and future has been brought about by Grant Morrison, the Scottish writer and playwright behind the award-winning "All-Star Superman." Morrison has masterminded a new direction for the character and returns to the 70-year-old "Batman" comic book series with its 700th issue Wednesday.

"I started to do a bunch of research, and I realized that every story had been told," Morrison said. He decided upon a psychological deconstruction of the character that would run over many issues and over two years, beginning with the story arc "Batman & Son" in 2006.

In order to bring Morrison's master plan to fruition, to "set up a whole new status quo" for Batman, as he puts it, Bruce Wayne would have to be driven to the brink of insanity and ultimately killed, as he was in the mega-crossover story "Final Crisis."

For the past year, Bruce's onetime ward Dick has been Batman, and his son Damian has taken over for Robin, in a Batman and Robin series lighter in tone than what we've been used to in the past few decades.

This has all led up to "Batman: The Return of Bruce Wayne," currently in the middle of its six-issue run, in which Bruce -- or his consciousness at least -- travels through time on his way back to the present day.

All of these plot threads culminate in the 700th issue, which tells stories of the Batman of the past (Bruce), present (Dick) and future (Damian), interpreted by three different artists.

"I wanted to sum up all of the things we love about Batman over the years and kind of see that moment where the Caped Crusader becomes the Dark Knight," Morrison explained. "[All of the stories] connect in an interesting way. We also have a section looking at all the different future Batmen. It's an attempt to do every version of Batman."

Indeed, Morrison is hard-pressed to choose a favorite interpretation of Batman. He has a great appreciation for all of them, from the campy 1960s TV series to Frank Miller's gritty 1980s graphic novel "The Dark Knight Returns" to the current movies directed by Christopher Nolan.

"Batman has been around 70 years. He's been a comedy figure. He was a sci-fi superhero in the '50s."

If he had to pick one, Morrison would go with the version of Batman as the world's greatest detective, as seen in the 1970s stories written by the legendary Denny O'Neil.

O'Neil is returning for a special one-shot story himself this month.

"We like to revisit the people that made the character great," said Dan DiDio, co-publisher of DC Comics (owned by Time Warner, which is also the parent company of CNN). "We pull him out of retirement every once in a while for Batman. It's not an anniversary party without him."

If that's not enough, DC has two more Bat-related mini-series starting this month.

One is "Batman Beyond," based on the fan favorite animated series with Terry McGinnis as another future version of Batman. This series officially brings the character into DC Universe canon.

"The fans have been looking for this for a while," DiDio said. "This looked like the perfect opportunity to reintroduce him."

Meanwhile, the secret past of another once "deceased" character, Jason Todd, the second Robin, is explored in "Red Hood: Lost Days."

Is Jason more a hero or villain? Morrison said, "He's an antihero, which is really good, and people like that. He's not an evil villain; he's just a fallen superhero."

As for Morrison's plans, he's sticking around the Batcave for a few more years. "I kind of figured [the story] would end, but it kept developing strands that were interesting."

After that, he's pondering changing the status quo of a certain Amazon princess: "I've done my Superman story, and I've done my Batman. ... It would be great to do one for Wonder Woman."