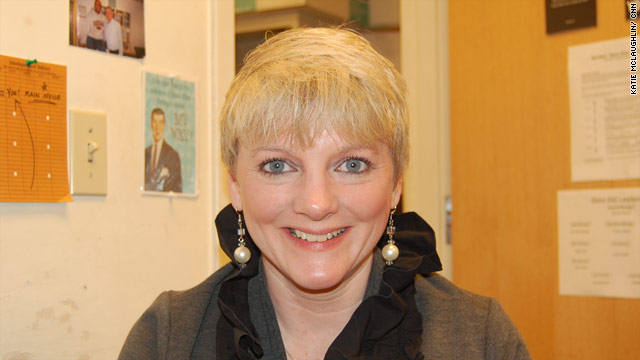 (CNN) -- Actress Alison Arngrim is most famous for playing the wicked Nellie Oleson on "Little House on the Prairie." Nellie -- one of the ultimate TV villains of all-time -- did things like imitate a stuttering child and persuade a classmate to steal the answers to a test among many other atrocities.

Arngrim, 48, has been asked so many questions about the beloved television series that she turned her account into a stand-up comedy act featuring a popular Q&A session that became her new memoir, "Confessions of a Prairie Bitch: How I Survived Nellie Oleson and Learned to Love Being Hated."

"Little House has had such an impact on people's psyches over the years," Arngrim told CNN. "And I wanted fans to know that it meant as much to me as it did to everybody else."

Arngrim said she began writing down anecdotes after Michael Landon died in 1991. When actress Melissa Gilbert -- who remains Arngrim's best friend to this day -- penned her own autobiography last year, the two women compared notes so stories wouldn't be redundant.

When asked about Landon, Arngrim calls the late actor a "driven, intense, volatile perfectionist. But then five minutes later he'd be playing some weird practical joke and then laughing maniacally. He was absolutely bonkers. He had the most crazy, twisted, warped sense of humor ever."

Arngrim says Landon instilled a belief among the entire cast and crew that hard work (and a paycheck!) was its own reward. There were no prima donnas allowed on that set.

"Look at what happened to Gary Coleman," said Arngrim. "When he was on 'Diff'rent Strokes' he was really catered to. He could show up on set in his pajamas. That wouldn't have flown on 'Little House'. The kids on 'Diff'rent Strokes' were absolutely fussed over. Every whim was entertained and they were paid enormous amounts of money. They were treated like stars. How'd that work out?"

Angrim added, "On 'Little House' we were expected to just work. Most of us were paid less, but we still have some of the money. No arrests, no convictions."

On the life of a child star, Arngrim said that "the further they make your life from reality, the harder its going to be to come back and the more trouble you're going to have transitioning to the real world."

As a small child, Arngrim and her eccentric family lived in Los Angeles' famed Chateau Marmont hotel. Arngrim's Canadian father was gay and worked as Liberace's manager. Her mother (also Canadian) was a voiceover artist who provided the voices for Gumby, Casper the Friendly Ghost, various friends of Gumby and Casper, Sweet Polly Purebred (Underdog's girlfriend), Davey of Davey and Goliath; and did a host of commercial voice work.

Her parents didn't find out until decades later that Arngrim had suffered brutal abuse at the hands of her brother. As a result, Arngrim has worked tirelessly to ensure other kids don't endure the same. She currently works with various child advocacy causes, including the National Association to Protect Children. Arngrim helped overturn an outdated law that allowed child molesters to avoid jail time if they were related to their victims.

Another personal tragedy inspired Arngrim to do activist work on behalf of people suffering from AIDS and HIV. Arngrim's "Little House on the Prairie" co-star Steve Tracy died of AIDS in 1986. Arngrim was particularly struck by the cruelty Tracy encountered even after his death. "His mother almost couldn't get his body cremated," Arngrim told CNN.

"I've learned to love being hated and I've become grateful for Nellie Oleson and being hated. Being Nellie has enabled me to help abused children and people with AIDS and HIV."

Arngrim keeps in touch with her "Little House" co-stars, and they reunite at least once a year. She often gets asked about the actors who portrayed Nellie's parents. They are "alive and well," Arngrim said. She also noted that the group honestly didn't realize they were "on to something" until about the third season.

"And that it wasn't until DVD sales in recent years that we realized it was a multicultural sociological phenomenon and that we were a part of Americana. We were clueless."

Arngrim's ultimate inspiration is the number of people that continue to come up to her and tell her, "'Little House on the Prairie' saved my life."

Arngrim said, "Whether it was the show's values or the way a character did something, people told me the show gave them the strength to go on. And I thought to myself, 'They don't say this about 'The Brady Bunch,' do they'?"

"I'm using my Nellie-ness for good, not evil, and it has been wonderful. I'm probably the most grateful bitch you ever saw."