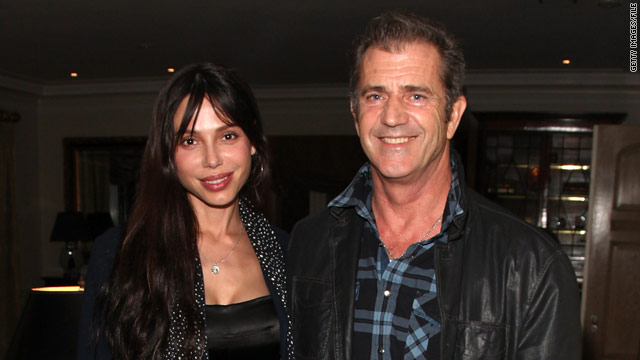 (CNN) -- RadarOnline on Wednesday released another audio recording of an explosive argument purportedly between actor Mel Gibson and his ex-girlfriend, Oksana Grigorieva, in which the man can be heard threatening to burn their house down.

It's the fourth such recording released since Friday by the website, which has not disclosed how it obtained the audio. The recordings are taken from a phone call and capture an obscenity-laced rant by the man as he spews racial and ethnic slurs, sexual insults and death threats.

The site claims the male voice is that of the 54-year-old Gibson. CNN has not independently confirmed the authenticity of the recordings.

In the recording released Wednesday, the man berates the woman for apparently falling asleep before having sex with him the prior evening.

In Tuesday's recording, the man uses an ethnic slur for illegal immigrants when arguing with the woman over a Latino worker employed by the couple.

On Monday, the website released a recording in which the man threatens the woman's life, saying "I'll put you in the f......ing rose garden."

And in a recording released Friday, the man launches into a racist, sexist rant against the woman, telling her she looks "like a f...ing b.... on heat and if you get raped by a pack of n...ers it will be your fault."

It's unclear when the recordings were captured.

Grigorieva, 40, has acknowledged that the female voice on the recordings is hers and that the other voice is Gibson's. CNN's efforts to obtain comment from Gibson have been unsuccessful.

Mel Gibson's publicist, Alan Nierob, said Wednesday that the filmmaker continues to have no comment regarding the recordings.

The couple have been locked in a custody dispute over their daughter.

Last week, the Malibu Hills Police Department opened an investigation into an alleged domestic violence dispute between Gibson and Grigorieva.

Grigorieva filed a restraining order against Gibson alleging that he struck her in the face, according to her spokesman, Stephen Jaffe.

The estranged couple are scheduled to appear in court July 20 for a status hearing on the restraining order.

Grigorieva has also spoken with sheriff's deputies and has provided a statement to them in their domestic violence investigation, Jaffe told CNN Friday.

The recordings "will be part of the investigation," Los Angeles County Sheriff's spokesman Steve Whitmore said on Monday.

It is not known how RadarOnline obtained the recordings. Jaffe said Friday that the site did not receive them from Grigorieva.

Meanwhile, some show business personalities appeared to distance themselves from Gibson.

Longtime friend and former "Maverick" co-star Jodie Foster and Danny Glover, Gibson's co-star in the popular "Lethal Weapon" film series, declined to comment on the allegations, according to the Los Angeles Times.

On Friday, the William Morris Endeavor talent agency confirmed to CNN that Gibson is no longer their client.

An attorney for Gibson's ex-wife, Robyn, told CNN Tuesday that she also would not be commenting on the recordings.

But at least one Hollywood star was defending the embattled actor.

"I don't like what he did here, but I know Mel and I know he's not a racist," TV host Whoopi Goldberg said on ABC's "The View" Tuesday. "You can say he's being a bonehead but I can't sit and say that he's a racist, having spent time with him in my house with my kids. I can't say it."

Gibson came under fire in 2006 when he admitted to making anti-Semitic remarks during a drunken driving arrest. He issued an apology at the time, and appealed to the Jewish community to help him recover from his alcohol addiction.