If not Ansel Adams, then who took garage-sale photos? 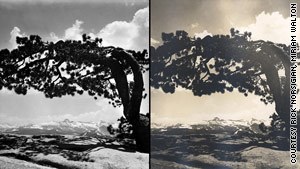 Miriam Walton says her uncle, Earl Brooks, took the photo on the right. She says she believes the photo on the left was also taken on the same day by him -- not Ansel Adams.
STORY HIGHLIGHTS

Los Angeles, California (CNN) -- The mystery is deepening over who created 65 glass photographic plates bought at a California garage sale for $45 by a man who believes they were created by famed nature photographer Ansel Adams.

A fortune could ride on the answer, since an art appraiser estimated the negatives could be worth $200 million if they were Adams' work.

But "Uncle Earl" or "Pop Laval" -- not Ansel Adams -- may have taken the photos that Rick Norsigian discovered 10 years ago, according to relatives of those California photographers.

Nature photographer Ian Shive said the list of photographers who could have taken the pictures is short. "There were only a few people doing that kind of work at that time," Shive said.

Adams' grandson and the managing trustee of his photographs both dispute Norsigian's claim that Adams made the negatives.

An 87-year-old Oakland, California, woman was drawn into the debate when she saw the photos in a TV news report Tuesday night.

"I'm looking at the picture that's hanging on my wall and I knew that Ansel Adams didn't take them," Miriam Walton said. "I knew my Uncle Earl took them."

Her uncle was Earl Brooks, an amateur photographer who lived in the Fresno, California, area in the 1920s, the decade experts said the photos were taken.

The image that made Walton sit up was of Jeffrey Pine, a much-photographed tree on top of Sentinel Dome at Yosemite, California.

Walton made some phone calls and the next day she was visited by Scott Nichols, who owns a fine-art photography gallery in San Francisco.

Nichols studied Walton's print and concluded it could have been taken at the same time as the negative Norsigian claims was created by Adams. "The shadows are almost identical," he said.

Nichols tends to agree with Walton that her uncle, not Adams, was the photographer.

"I betcha two cents that the case," Walton said.

"A lot of people photographed Yosemite and did a nice job," Nichols said. "But when you look at an Ansel Adams, it says, 'I'm Ansel Adams.'"

Shive, who reviewed 17 of the images from Norsigian's collection, agreed that they do not show "the emotion and nature-as-art interpretive style" that marked Adams' later work.

"But all artists grow and their styles change, becoming more defined and perhaps their origins becoming unrecognizable when compared to their final destinations," Shive said. "That could easily be the case here."

Arnold Peter, the Beverly Hills lawyer who led Norsigian's effort to authenticate his negatives, said the fact that Walton has a similar print proves nothing.

Her relatives could have purchased it from a Yosemite souvenir shop where Adams peddled prints early in his career, Peter said. Or it could have been one of many Adams gave away as gifts.

There may be no way know if Walton's print is an Adams -- not an Uncle Earl -- photo, since thousands of Adams' Yosemite negatives were destroyed in a darkroom fire in 1937, Peter said.

It's been about 70 years since Walton last saw Uncle Earl, who she described as "an early hippie." She inherited the photos when her father died in 1981.

She traces the photos to Earl Brooks because "Uncle Earl" is handwritten on the print, she said. She believes it was her father's writing.

"My father would not have had anything from anyone else," Walton said. "He wouldn't have had Ansel Adams."

If it is proven her uncle did create Norsigian's photos, Walton said she does not want them.

"I'm getting to the age now that I don't want stuff," she said. "I'm trying to get rid of stuff."

Another photographer on the short list of those who might have made the negatives is Pop Laval, a commercial photographer in the Fresno area from 1910 until 1965.

William Turnage, the managing trustee of the Ansel Adams Trust, said it was an "interesting wrinkle" in the mystery of the negatives.

Laval created more than 100,000 negatives, including many mountain images at Yosemite in a style similar to Adams. He also photographed the same San Francisco landmarks seen in the Norsigian photos.

His son, Jerry Laval, interned with Ansel Adams, according to great-granddaughter Elizabeth Laval, who manages the Pop Laval Foundation.

Laval said she when she first saw the numbering system on the manila envelopes that contained Norsigian's glass plates she thought "Oh, my god, these are Pop's."

"Surprisingly, the envelopes look exactly like Pop's envelopes," she said.

Like Adams, Pop Laval was meticulous in numbering envelopes to keep track of his thousands of negatives, she said.

But the theory that Laval authored Norsigian's photos hit a snag when she opened his ledger. His numbers that correspond to the Norsigian plates show he would have been shooting elsewhere on those dates.

"I have to assume they were not his," Laval said.

When Ansel Adams died in 1984, he left his 40,000 known negatives in a trust managed by William Turnage, who reacted with anger when Norsigian and his lawyer, Arnold Peter, claimed at a news conference Tuesday that their negatives were Adams' work.

Turnage called them "a bunch of crooks" who "are pulling a big con job."

Peter called Turnage's attack "a shameful and pointless disparagement of the professional reputations of some of the top leaders in their respective fields."

He said that based on the overwhelming evidence gathered by a team of experts, "no reasonable person would have any doubt that these, in fact, were the long-lost images of Ansel Adams."

Adams' grandson, Matthew Adams, is also unconvinced. "I don't think that they've proven that they are authentic ... And I don't know that you could ever prove that they are."

Adams, who reviewed Norsigian's evidence last year, said he wanted more scientific tests, including carbon-dating, to prove beyond a doubt that the work was that of his grandfather.

He cited "a number of inconsistencies," including the conclusion by two handwriting analysts that notations on manila envelopes containing the plates were made by Ansel Adams' wife, Virginia Adams.

Virginia Adams -- who spent most of her life in that area of California -- would have spelled those names correctly, he said.

The art dealer who placed their eventual value at more than $200 million said that the controversy is increasing their value by "driving the market to them."

"They're making them so desirable," said David W. Streets. "People all over the world are seeing this and saying 'I want one of each.' "