Lawyer: Lindsay Lohan's doctors being investigated by medical board 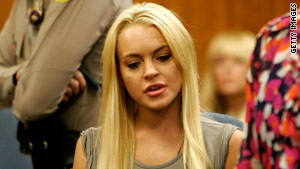 Los Angeles, California (CNN) -- Doctors who prescribed drugs to Lindsay Lohan are being investigated by the California Medical Board, according to the lawyer for Lohan's father.

Lisa Bloom, the Los Angeles lawyer hired by Michael Lohan to help with his ongoing dispute with his actress daughter, confirmed in July that she had asked the medical board to look into the physicians' prescription practices. Bloom said Monday the investigation is underway.

"I will confirm that the medical board is investigating and that Michael Lohan and I are cooperating with the investigation," Bloom told CNN Monday.

A spokesman for the medical board did not immediately respond to CNN's request for confirmation or details.

A Los Angeles judge sentenced Lohan, 24, to serve a jail sentence and enter court-ordered drug rehab this summer after she was found to be in violation of her probation for a 2007 drunk driving conviction.

She was released from a rehab program at Ronald Reagan UCLA Medical Center last month.

Michael Lohan, who is estranged from his daughter, has been outspoken about his belief his daughter has been over-prescribed controlled drugs.