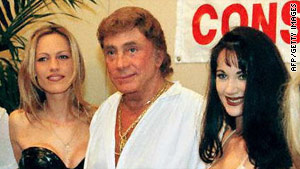 Bob Guccione makes an appearance in 1996 to promote a film project. He was 79.
STORY HIGHLIGHTS
RELATED TOPICS

Guccione, 79, died at Plano Specialty Hospital, with his wife, April Dawn Warren Guccione and two of his children, Bob Jr. and Tonina, at his side, a family statement said.

April Guccione's mother, Georgann Flinchbaugh, told CNN her daughter, who had been married to the publishing and entertainment magnate since 2006, was too distraught to talk.

"He was a wonderful man," Flinchbaugh said. "She's heartbroken. He was the love of her life."

Bob Guccione: Life in the Penthouse

Guccione launched Penthouse magazine, one of several magazine ventures, in 1965. He and Playboy magazine founder Hugh Hefner competed for the attention of men for several decades.

A painter and art collector, the businessman was born into a family of Sicilian immigrants in Brooklyn, New York.

Guccione's consuming interest was painting, the family said, and in 1948 he wrote to a friend, "I want to devote my life to the serious and profound intricacies of true and imaginative art."

Eventually, he launched Penthouse, which was more explicit than Playboy, its main competitor. The Penthouse key became a well-known trademark.

Guccione, who was married four times, also produced or invested in several movies, including "Caligula" and "Chinatown."

Services will be private, the family said.