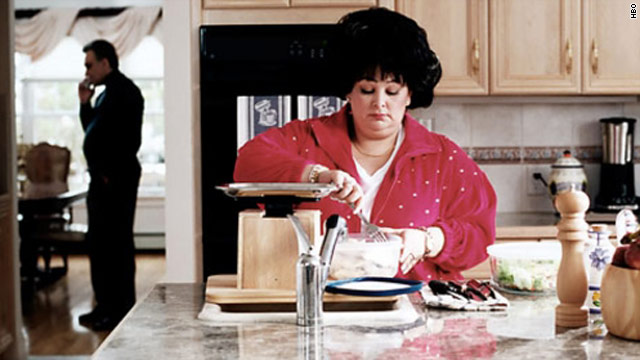 Denise Borino-Quinn played Ginny Sacramoni on "The Sopranos." She said she got the part in an open casting call.
STORY HIGHLIGHTS
RELATED TOPICS

(CNN) -- Denise Borino-Quinn, who played the wife of a mob boss in the award-winning HBO series "The Sopranos," has died of cancer at 46.

"The Sopranos," which ran from 1999 to 2007, told the story of mobster Tony Soprano and a colorful cast of bumbling criminals.

Borino-Quinn, who said in an interview that she got the part in a 2000 open casting call, played Ginny Sacramoni, married to Johnny Sacramoni. An HBO character bio described Ginny as "Rubenesque."

According to IMDB.com, the internet movie database, Borino-Quinn was a legal secretary and part-time manicurist in Roseland, New Jersey, when she got "The Sopranos" role. She was selected from 14,000 actresses.

The actress married her late husband, Luke Quinn, in 2005. She has two younger brothers, Vincent Borino and Chris Borino.