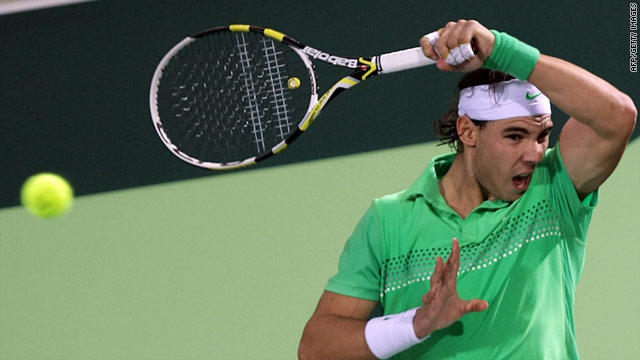 The Spaniard, whose defeat to the Swede in the French Open triggered the unraveling of his season amid injury problems, won 7-6 (7-3) 7-5 as he began his build-up to the defense of his Australian Open title in encouraging style.

Soderling, who also defeated Nadal at the season-ending ATP World Tour finals in London, had come into the match buoyed by his breakthrough first victory against world No. 1 Roger Federer in the semifinals on Friday.

Having taken the first set to a tie-break, Soderling fought back from 4-2 down in the second set to level at 4-4 but Nadal -- who lost to Andy Murray in the final last year -- showed no signs of the inconsistency that plagued the latter half of his 2009 campaign as he clinched victory.

Wawrinka replaced Jo-Wilfried Tsonga in the field after the Frenchman pulled out with a wrist injury.

Federer and Nadal will next head to Doha for the opening tournament of the ATP Tour schedule, while world No. 8 Soderling will be top seed for the Chennai Open in India.