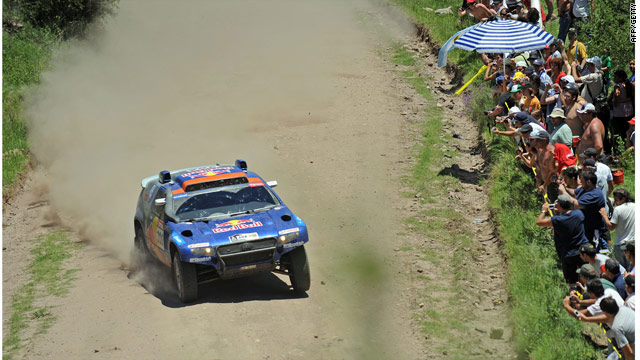 Al-Attiyah powers through in his Volkswagen with spectators in close attendance in the Dakar Rally.
STORY HIGHLIGHTS
RELATED TOPICS

(CNN) -- Qatar's Nasser Al-Attiyah claimed the lead in the Dakar Rally on Sunday as the competitors involved in a death crash on the first stage in Argentina withdrew from the grueling 9,000 kilometer 15-day event.

Germany's Mirco Schultis and Swiss co-driver Ulrich Leardi did not start the 355km second leg from Cordoba to La Rioja after their 4x4 vehicle accidentally ploughed into a group of spectators on Saturday.

Local woman Sonia Natalia Gallardo, 28, suffered serious head, pelvic and stomach injuries in the incident and died later in a Cordoba hospital while four others were injured.

The group were reportedly standing in an unauthorized viewing area when the tragic accident occurred.

Race organizers, responding to criticism about safety, have set up special spectator zone areas on each stage.

The Dakar rally, which originally started from the French capital of Paris and raced through north Africa, is now held over challenging terrain in Argentina and neighboring Chile.

Concerns over safety in one of the most dangerous motorsport events in the world were raised again when three died in the 2009 event, including French motorcyclist Pascal Henry.

Al-Attiyah, driving a Volkswagen, dominated the second stage to take a one minute 19 second lead over teammate and former world rally champion Carlos Sainz of Spain, who finished fourth on the leg.

The Qatari said it had been a tough day in difficult conditions.

Dakar Rally legend Stephane Peterhansel of France, in a BMW, was sixth on the stage and is third overall. Peterhansel is a six-time motorcycle winner and has won the car section three times.

His fellow BMW driver, Spain's Nani Roma, won Saturday's opening stage, but lost valuable time on the second leg as he suffered a double-roll and finished 18th to slip back to eighth overall.

France's David Fretigne on a Yamaha won the motorcycling section, but compatriot David Casteu of Sherco retained the overall lead after coming in second, just 43 seconds behind.

Spaniard Marc Coma on a KTM finished third to go second overall ahead of French teammate Cyril Despres with Fretigne up to fourth in the standings.