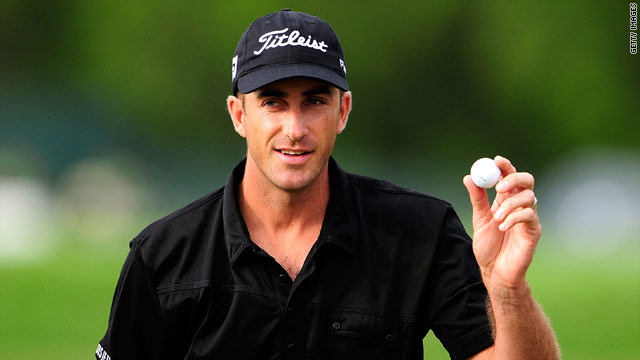 The Australian shot a final-round 67 at the par-73 Kapalua Resort Plantation Course to win by a single stroke on 22-under-par from South Africa's Rory Sabbatini -- securing a tournament made up of the previous year's PGA Tour event winners for the second year in a row.

American Matt Kuchar was third in the 28-man field on 19-under-par with his compatriot Sean O'Hair in a tie for fourth on 18-under with Scotland's Martin Laird.

Ogilvy started the day one shot behind third-round leader and U.S. Open champion Lucas Glover -- but as the front runner dropped off the leaderboard, Ogilvy's new target became Sabbatini.

Sabbatini had given the leaders plenty to think about with a bogey-free, 10-birdie 63 that gave him the clubhouse lead until Ogilvy brought up the rear and took the title, the Australian reaching the 18th tee with a one-stroke lead and needing to avoid bogey or worse to force a play-off.

Laird had been in contention all week and on 19-under after 15 holes was just three shots back, only to bogey 16 and 17 to ruin his hopes of victory.

There was an eagle opportunity at the par-five 18th but the Scot's long putt just missed right and Laird's birdie nevertheless bumped him up into a top-five finish on 18-under.

O'Hair arrived at the same score from the other direction having double bogeyed the last and posting a 68.

England's Paul Casey, the world number seven, closed out his week with a third straight round of four-under-par 69 to finish on 15-under-par in a tie for 10th place alongside world number three Steve Stricker, Pat Perez and Masters champion Angel Cabrera.

Glover had begun the day with a one-stroke lead over Ogilvy but a closing 76 featuring four birdies, three bogeys and two double bogeys saw him drop to a tie for 14th place