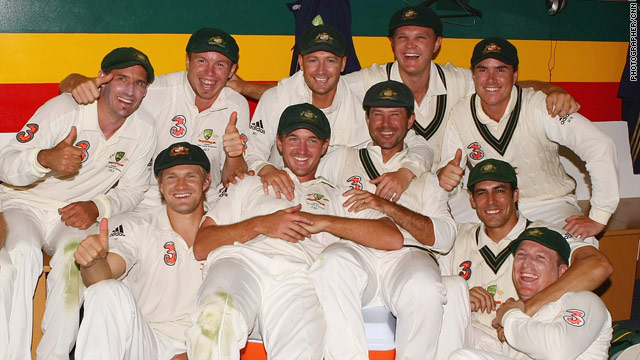 Thumbs up from the Australian side as they completed their fourth successive 3-0 Test whitewash over Pakistan.
STORY HIGHLIGHTS

(CNN) -- Spinner Nathan Hauritz steered Australia to a comfortable 231-run third Test victory over Pakistan at the Bellerive Oval in Tasmania on Monday -- completing a 3-0 whitewash over their opponents for a fourth successive occasion.

Starting the fifth and final day on 103-4, the visitors were bowled out for just 206 -- chasing a victory target of 438 -- as Australia secured a record-equalling 12th consecutive win over Pakistan.

Pakistan reached 168 for six at lunch with a light shower during the lunch break providing only a sliver of hope for the visitors to claim an undeserved draw.

Only Khurram Manzoor offered any resistance on the final day, posting a brave 77 lasting 315 minutes in an attempt to make amends for his first-innings duck before being caught by wicket-keeper Brad Haddin off the bowling of Hauritz.

Pakistan offered little from then on as Michael Clarke snapped up a catch at first slip to take the wicket of Umar Gul for a duck, again off the bowling of Hauritz.

Mitchell Johnson claimed his first wicket when he bowled Mohammad Asif for a duck before Peter Siddle finished the match off with the new ball after bowling Danish Kaneria for one.

Australia's fourth successive 3-0 clean sweep secures a place in the history books, equalling the most successive Test wins by any team against the same opponents held by Sri Lanka against Bangladesh.

Australia have now won five of their six Tests this summer. Only a draw in the second Test against the West Indies in Adelaide preventing a spotless summer for Ricky Ponting's side.

Hauritz took five-wicket hauls in the second innings of Australia's wins in both Melbourne and Sydney, and helped himself to three more on the final day in Hobart to finish with an impressive 29 wickets in six Tests this summer.

Australian captain Ricky Ponting was named man of the match for his sparkling knocks of 209 and 89 while all-rounder Shane Watson was adjudged player of the series for his consistent strength at the top of the batting order.

Meanwhile, India were bowled out for just 243, their lowest-ever first innings score against Bangladesh, on the second day of the first Test in Chittagong.

In a match that was halted several times due to bad light and rain, Sachin Tendulkar's 44th Test century gave sparkle to an otherwise dismal batting effort as the tourists struggled to cope with Shahadat Hossain and Shakib Al Hasan, who both completed five-wicket hauls.

Zaheer Khan led the visitors' fightback with a two-wicket burst before India's efforts were halted by more bad weather with Bangladesh on 59 for three, trailing by 184 runs.