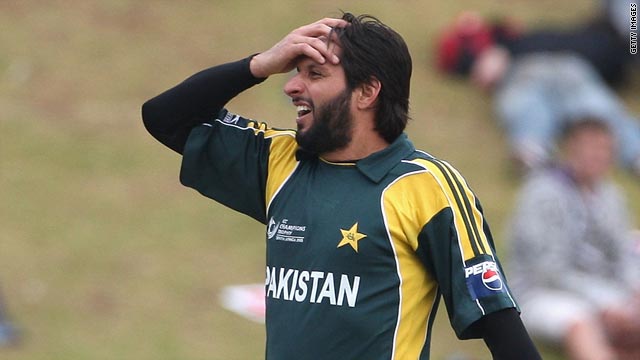 (CNN) -- World Twenty20 champions Pakistan were left stunned after none of their players were signed up for the lucrative Indian Premier League cricket tournament in Tuesday's auction.

With this year's budget slashed from $2 million per team to just $750,000, only 11 of the 66 international players on offer were snapped up.

West Indies all-rounder Kieron Pollard and veteran New Zealand pace bowler Shane Bond were the biggest winners as the Mumbai Indians and the Kolkata Knight Riders respectively used their entire allocated funds to sign them for the 2010 season.

But Pakistan's Twenty20 captain Shahid Afridi, one of the world's most explosive players in the limited-overs format, failed to secure a place along with teammates highly-rated Mohammad Aamer, Umar Gul and Umar Akmal.

Afridi's manager blamed the Indian government for continuing its long-running tensions with Pakistan.

"I'd heard prior to the auction that franchises were being advised not to bid for Pakistani players as the players from Pakistan would not be issued with visas by the Indian government, and that is precisely what has happened," Umar Khan told www.pakpassion.net.

"The Indian Premier League have been using Afridi's name and pictures to publicize the tournament and to build up the hype, and he was expected to be one of the most popular players amongst the franchises."

I am stunned by the omission. I thought I would be picked and am very surprised at the outcome of the auction
--Shahid Afridi

Big-hitting all-rounder Afridi was stunned to be left out, having played for the Deccan Chargers in 2008 but did not feature last year as the team won the title.

"I'm stunned by the omission and, yes, I'm obviously very disappointed as I was really looking forward to playing once again in the Indian Premier League and testing my skills against the world's best players and against friends and colleagues," he said.

"I thought I would be picked and am very surprised at the outcome of the auction."

Pollard was sought by four teams, with Mumbai heading off Kolkata, the Royal Challengers Bangalore and the Chennai Super Kings after making a sealed-envelope final bid.

The 22-year-old Pollard, who has played only 15 one-dayers and 10 Twenty20 internationals, takes $750,000 as his payment while the undisclosed extra money goes to the IPL.

The 34-year-old Bond, who has retired from Test cricket to prolong his career, has been welcomed into the IPL fold despite having signed up with its unsanctioned rival Indian Cricket League, which has not been staged since 2008.

He went into the auction with a $100,000 reserve price tag, but both Kolkata and the Chargers bid the full amount for him.

Former India batsman Mohammad Kaif was sold to the Kings XI Punjab franchise for $250,000 after his contract was bought out by the Rajasthan Royals, while Bangalore signed England one-day specialist Eoin Morgan for $220,000.

In the only other sale, Punjab bought South Africa's Yusuf Abdulla for $50,000.

Meanwhile, India reached 122-1 in their second innings at stumps on the third day of the opening Test against Bangladesh in Chittagong, having bowled out the home side for 242.

The tourists narrowly avoided conceding a first-innings deficit for the first time against cricket's lowest-ranked Test nation, with Bangladesh falling one run short after resuming on 59-3 after bad light and fogged delayed the start of play on Tuesday.

Mahmudullah scored a personal best 69 as he added 108 for the seventh wicket with Mushfiqur Rahim (44), but spinner Amit Mishra cleaned up the tail to finish with three wickets to match the feat of left-arm seamer Zaheer Khan.

Mishra was then unbeaten on 24 at stumps along with opener Gautam Gambhir, who made 47 after putting on 90 for the first wicket with Virender Sehwag (45).