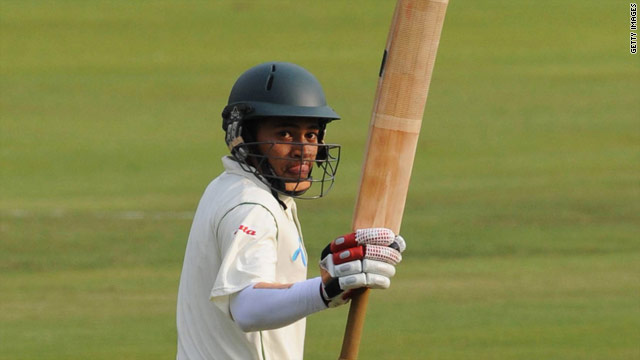 (CNN) -- India blew Bangladesh away with a strong display in the field, wrapping up a 113-run victory over the hosts on the final day of the first Test in Chittagong.

Ishant Sharma gave India early breakthroughs in the morning, Virender Sehwag and Zaheer Khan chipped in with vital wickets and Amit Mishra completed a four-wicket haul as India cantered to victory with a session to spare.

Mushfiqur Rahim delayed the end with a stroke-filled 101 after opener Tamim Iqbal bolstered the innings with 52, but the home side -- 67 for two at the start of play -- were bowled out for 301.

A diligent approach was required of the home side if they were to save the game, but instead their batsmen played into India's hands with an aggressive approach.

But that attacking intent was nipped in the bud when batsman Mohammad Ashraful attempted to drive Ishant on the up, only for an edge to be neatly snapped up by Rahul Dravid at second slip.

Victory for India then seemed a foregone conclusion when Raqibul Hasan, who suffered a painful rap on the elbow, was trapped in front by Ishant with a delivery that nipped in.

Tamim helped Bangladesh recover somewhat from those early blows, the opener hammering a wayward Shanthakumaran Sreesanth for two boundaries in one over and reaching his third Test half-century with a reverse sweep of Mishra.

But Sehwag brought himself on just before the lunch interval and struck in his second over, luring Tamim into a wild slash and inducing the edge, Dravid completing the dismissal with a sharp catch at slip.

Shakib Al Hasan was Mishra's first victim of the day and Mahmudullah went shortly after, losing out to Zaheer.

Shahadat Hossain and Mushfiqur held up the end with a 60-run stand for the eighth wicket, but Mishra ended that stand, boring through Shahadat's defensives and bowling him through the gate.

Mishra should have had another wicket but Yuvraj dropped a simple catch from Shafiul Islam, extending the tailenders stay.

But that reprieve hardly proved costly as Mishra held a low return catch from Shafiul in the next over to send back the batsman.

The home side had slipped to 258 for nine by then and the session was extended and the tea interval delayed.

With an attacking field in place, runs were there for the taking and Mushfiqur cashed in, reaching his maiden century with a straight-driven boundary off Mishra, his 17th boundary.

He had already smashed a six by then and had reached the milestone off only 112 deliveries, the fastest-ever century by a Bangladesh batsman.

Mishra, however, brought up victory by prising out Mushfiqur, the wicketkeeper-batsman lofting the bowler over the top, but only finding the fielder at long-off.