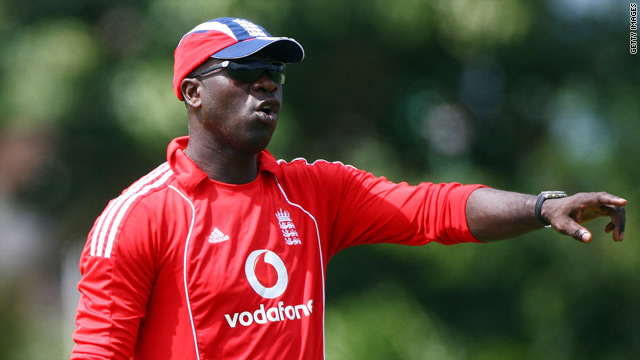 The 40-year-old, who played two Tests and 15 one-day internationals for the Windies, will take over the coaching role left vacant by the sacking of Australian John Dyson in August last year.

Interim coach David Williams will stay in charge for the one-day tour of Australia starting next week, and then become Gibson's assistant for the home series against Zimbabwe later this month.

Gibson had been involved in the England set-up since September 2007 following a long career on the county circuit, but asked to be released from his contract.

"I will always be grateful to the ECB for the opportunities they gave me as a bowling coach and in particular to [former head coach] Peter Moores for offering the role as England fast bowling coach," he told the UK Press Association.

"I would like to thank [current coach] Andy Flower as well for all the advice, encouragement and support he has given me in the last year. It was a privilege to be a part of such an outstanding and successful team."

Gibson takes over a team struggling to regain the success of the world-dominating 1980s side, with the West Indies now ranked eighth out of nine Test-playing nations and eighth out of 12 in the limited-overs format.

The team's core of senior players returned for the recent tour of Australia after going on strike following the latest in a string of disputes with the board, but lost the Test series 2-0.

West Indies Cricket Board chief executive Ernest Hilaire said that Gibson will have time to make an impact.

"This will give him an opportunity to stamp a particular style of coaching a West Indies way across all the teams. This is really important because by the time our players reach the senior team, they should be the finished article, and they really ought to be focusing mainly on their strategy, tactics, how they win games, and being able to execute.

"This has to be a long-term project. This is not a short-term project. We are not asking Ottis to turn around the West Indies' fortunes and make them a winning team overnight. There has to be a gradual chain of development."