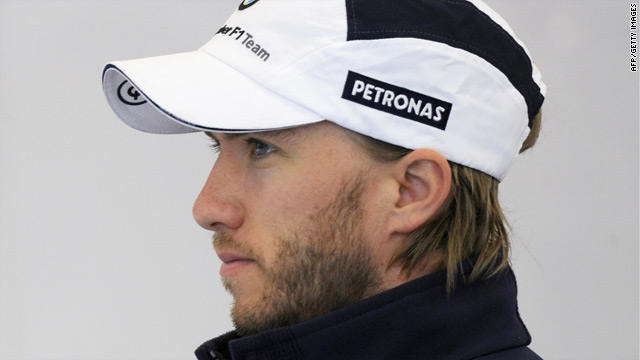 Nick Heidfeld has had an association with German manufacturer Mercedes since his days as a junior driver.
STORY HIGHLIGHTS
RELATED TOPICS

(CNN) -- Nick Heidfeld has joined Mercedes as back-up for Michael Schumacher and Nico Rosberg to complete the new team's line-up for the 2010 Formula One season.

The 32-year-old, who raced for BMW Sauber for the past four years and has a decade of experience in motorsport's elite category, will take on a testing role and also be a reserve driver.

"I am very pleased to be joining the Mercedes GP Petronas Formula One team," the German told official Web site www.mercedes-gp.com on Thursday.

"It's the team which has attracted the most interest in the close season, not only because of the comeback of Michael Schumacher, but also because this season sees the return of the Silver Arrows cars as a Mercedes-Benz works team for the first time in over 50 years.

"While I would of course have preferred a seat as an active driver, I am really proud to be part of the new Silver Arrows team. I have seen how committed everyone at the team is and I feel the same. I will be doing my very best to support Michael and Nico this year."

Heidfeld has a long association with Mercedes, which took over the world champion Brawn team at the end of last year.

He was supported by the German manufacturer as a junior driver, and then was test driver for McLaren Mercedes for the 1998 and 1999 seasons before earning his first race drive with Prost in 2000.

Since then he has competed in 167 grands prix, achieving 12 podium finishes, but was left without a team when BMW pulled out of F1 last year.

He joins a team led by Ross Brawn, who led the outfit to shock double world titles in 2009 as Jenson Button won the drivers' crown and Rubens Barrichello placed third overall to help clinch the manufacturers' championship.

Button has since moved to McLaren while veteran Brazilian Barrichello joined Williams, one of Heidfeld's former teams.