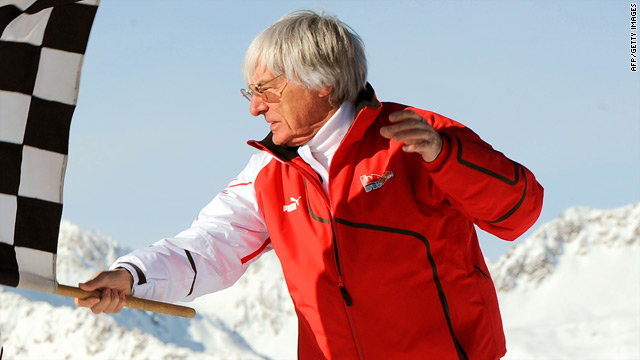 Bernie Ecclestone expects that Campos Meta and U.S. F1 Team will not be ready for the start of the new season.
STORY HIGHLIGHTS
RELATED TOPICS

(CNN) -- Formula One chief Bernie Ecclestone has reportedly cast doubt on the participation of two new teams ahead of the 2010 season, suggesting that a Serbian outfit will instead be on the starting grid in Bahrain.

The Stefan Grand Prix team, owned by businessman Zoran Stefanovic, announced this week that they have already sent a container of equipment to Bahrain and will be testing drivers in Portugal later this month.

Last year Stefan GP applied to take part in 2010 but missed out when Virgin Racing, Campos Meta 1 and U.S. F1 Team were handed places, and then Sauber salvaged a spot on the grid despite the pullout of BMW.

Stefan GP have also announced a technical support deal with Toyota, who withdrew from F1 last year and have reportedly sold equipment and cars to the Serbians.

Web site Autosport.com has reported that Stefan have been working with former McLaren chief designer Mike Coughlan, who was sacked in 2007 due to his involvement in the Ferrari spy scandal.

Ecclestone told German sports paper Sport Bild that he doubted that Campos and US F1 would be ready for the opening race in Bahrain on March 15.

I do not believe in the participation of U.S. F1 and Campos. Instead, I have good contacts with Stefan GP
--Bernie Ecclestone

"I do not believe in the participation of U.S. F1 and Campos," the 79-year-old said.

"Instead, I have good contacts with Stefan GP and would like to give this team a good starting point. Ralf Schumacher would be the perfect driver for them, he knows the team and he has experience."

Schumacher, the younger brother of recently-returned seven-time world champion Michael, has not raced in F1 since leaving Toyota at the end of 2007. He drove in the DTM touring car series in 2008, finishing 14th.

Autosport claims that former Williams driver Kazuki Nakajima will be involved with Stefan, who plan to launch their new car before tests at the Portimao circuit on February 25-28.

"SGP Team will be testing with two drivers over three days. [The] identity of drivers will be announced in due course. First driver has already two years in F1," Stefan said on their official Web site on Tuesday.