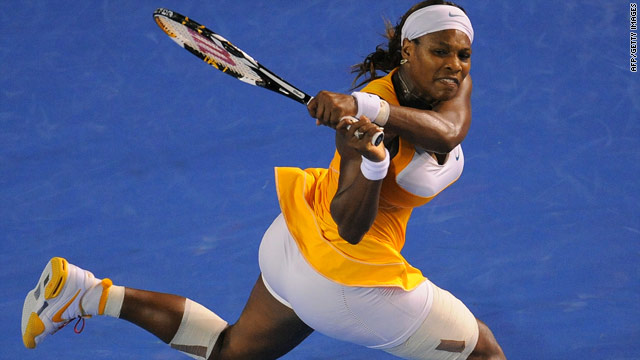 (CNN) -- Australian Open champion Serena Williams has pulled out of next week's Paris Indoor Open due to a leg injury.

The world No. 1 picked up the problem on the way to winning the opening Grand Slam tournament for the fifth time last month, the French event's organizers said on Saturday.

Seventh-ranked Elena Dementieva will take the American's place as top seed, with Italian No. 12 Flavia Pennetta second and Yanina Wickmayer of Belgium third.

Williams has won the Paris title twice, beating former world No. 1 Amelie Mauresmo in the final both times. The Frenchwoman won it for a record third time last year but has now retired.

Meanwhile, last year's losing finalists the United States made a strong start without Williams in their Fed Cup first-round clash with France in Lievin on Saturday.

The winner of the tie will play either Serbia or Russia in the semifinals, with reverse singles on Sunday before the possibly decisive doubles.

But Jelena Jankovic, another ex top-ranked player, came from behind to level the tie by beating Alisa Kleybanova 4-6 6-4 6-0 as she won the last 11 games in a match lasting two hours and 18 minutes.

Alona's win was the Ukraine's first at World Group level.

The winner of the tie will face either the Czech Republic or Germany in the last four, with that clash also tied at 1-1.

Anna-Lena Groenefeld put Germany ahead in Brno with a 6-2 6-2 victory over Lucie Safarova, but Petra Kvitova leveled for the hosts with a 6-4 6-4 win against Andrea Petkovic.