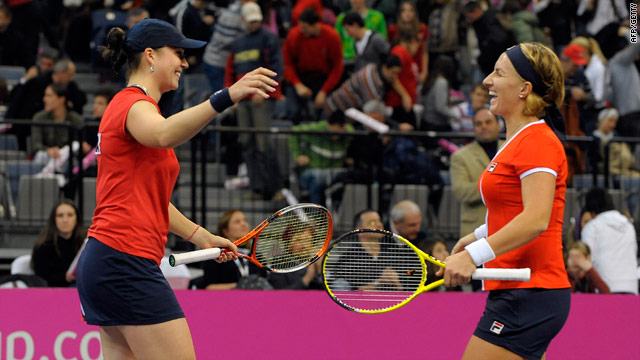 (CNN) -- Four-time Fed Cup champions Russia edged Serbia 3-2 on Sunday to reach the semifinals of this year's competition where they will play the United States.

Russia owed their victory to the doubles partnership of Svetlana Kuznetsova and Alisa Kleybanova, who beat Jelena Jankovic and Ana Ivanovic 6-1 6-4 in the decisive rubber in Belgrade

Earlier in the reverse singles, Kleybanova beat Ivanovic 6-2 6-3 while Jankovic scored her second victory of the weekend as she saw off Kuznetsova 6-3 4-6 6-3 to level the tie.

"We are really happy after this hard-fought victory," Kuznetsova told the official Web site www.fedcup.com

"We played the crucial doubles like real partners. Alisa was really good although she's a singles player."

The United States, missing both the Williams sisters, were still too good for France as they wrapped up a 4-1 win on an indoor clay court at the Stade Couvert Regional de Lievin.

Teenage star Melanie Oudin continued her heroics with a second singles victory as she beat Julie Coin 7-6 6-4 to give her side an unassailable 3-0 lead.

"I was a little nervous in the beginning," Oudin said. "She definitely stepped up her game when she came out on court and served some really great service games.

"There wasn't much I could do in the beginning, besides staying in there with her."

France restored some pride with Pauline Parmentier's 6-4 6-4 win over Christina McHale before Bethanie Mattek-Sands and Liezel Huber won the concluding doubles for the U.S.

Defending champions Italy are also in the semifinals after a convincing 4-1 win over the Ukraine.

We played the crucial doubles like real partners. Alisa was really good although she's a singles player
--Svetlana Kuznetsova

Francesca Schiavone came from a set down to beat Kateryna Bondarenko to seal the victory after Flavia Pennetta had downed Alona Bondarenko on straight sets in the first reverse singles on Sunday.

They will play the Czech Republic who beat Germany 3-2 thanks to a decisive doubles victory.

Lucie Hradecka, who was making her Fed Cup debut as a late replacement for the injured Lucie Safarova, proved the final day star in Brno.

In the opening reverse singles she beat Andrea Petkovic 6-1 7-6 to give the home team a 2-1 lead.

Anna-Lena Groenefeld beat Petra Kvitova 4-6 6-3 6-2 to draw the Germans level, but Hradecka and Kveta Peschke saw off Groenefeld and Tatjana Malek 6-3 6-2 to seal a deserved passage to the last four.